6 Ways Palm Springs Is A Magnet For Designers and Creatives

From film and photo festivals to the Coachella Music and Arts Festivals, Palm Springs and the greater Coachella valley play host to a dearth of arts events. What makes Palm Springs an inspiration to artists? Perhaps its year round sunshine, or maybe the magical mountain vistas, or the crisp desert air. Palm Springs’ allure goes back to its time as a playground for Hollywood’s rich and famous, first in the 1920s, perhaps and most prominently, in the 1950s. These glamorous ties have helped cement the desert city’s ongoing arts and design scene. 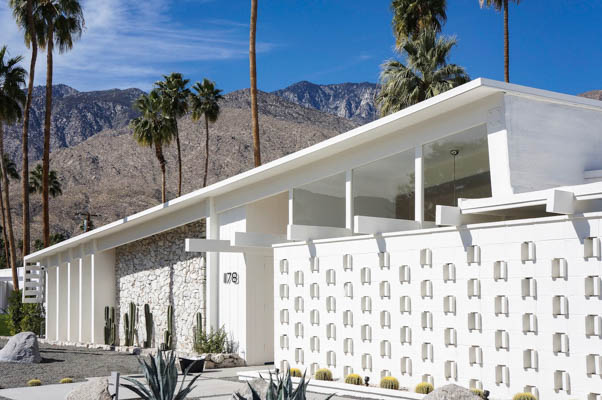 PHOTO CREDIT: MARNI MERVIS
The region has been drawing creatives to its sands for decades, oftentimes with artists using the city as inspiration for their art. Other times, these creatives bring their talent to the city’s extensive design arena, rehabbing and transforming the area’s Mid-century Modern homes. In these cases, these artists play with color and design, adding to Palm Springs’ burgeoning culture and arts scene.

No doubt it's frequently these aforementioned architecturally significant homes that people find so magnetizing, driving design lovers from all over the world to visit for Palm Springs during Modernism Week, a celebration of Mid-century design, preservation and sustainability. Let’s dive in and take a look at the many ways in which today’s creatives continue to find themselves charmed and inspired by Palm Springs.

Palm Springs grew in population during the mid-twentieth century, when the expansive landscape and forward thinking of the area allowed architects and designers to experiment with new styles of home design. The region is so full of excellent examples of Mid-century Modern homes, designed by William Krisel, Joseph Eichler and Albert Frey, that fans gather in the city for the week-long festival each February with a fall preview event the preceding October. 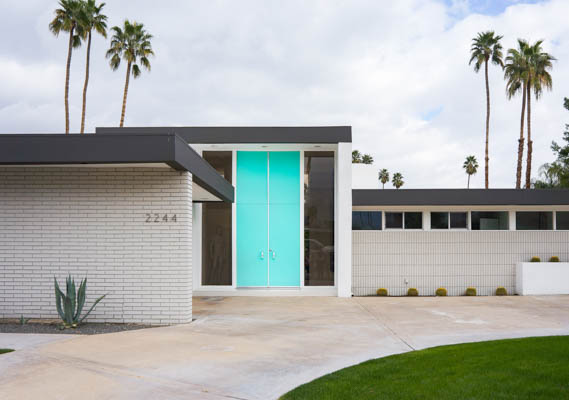 PHOTO CREDIT: MARNI MERVIS
Dunn-Edwards has acted as an exclusive paint sponsor for the festivities, organizing one of Modernism Week’s most-talked about events: the Palm Springs Door Tour. The tour, which starts at the kaleidoscope-hued Saguaro Hotel (decked out in Dunn-Edwards shades), invites bicyclists and walkers to daydream amid the eye-popping colorfully-painted doors in the city’s Indian Canyons neighborhood.

A “Pop” of Color With Tysen Knight

Palm Springs may have its own art museum, but some art cannot be housed within four walls. In these instances, art merges with public life. For example, when the Palm Springs Public Art Commission (PSPAC) wanted to beautify the city’s public benches, they worked with local painter Tysen Knight to lead the artistic vision. Knight, who defines his style as “pop-art-meets-street-art,” painted ten benches, each with an image of a larger-than-life pop icon — fitting for a town whose Hollywood history looms large. 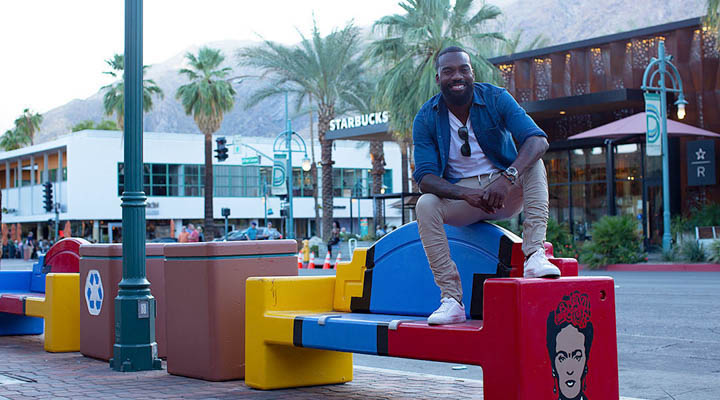 PHOTO COURTESY OF TYSEN KNIGHT
For the benches, Knight used Dunn-Edwards paint in bold primary colors of red, blue, and yellow, with bold black outlines, a style influenced by his childhood memories of seeing bright beautiful street art on subway trains and buildings.

Dazey LA Designs in the Desert

One creative mind that’s been drawn to the desert beauty of Palm Springs is fashion and interior designer Dani Nagel. We most recently covered how Nagel brought so much color to her William Krisel-designed Palm Springs getaway home. 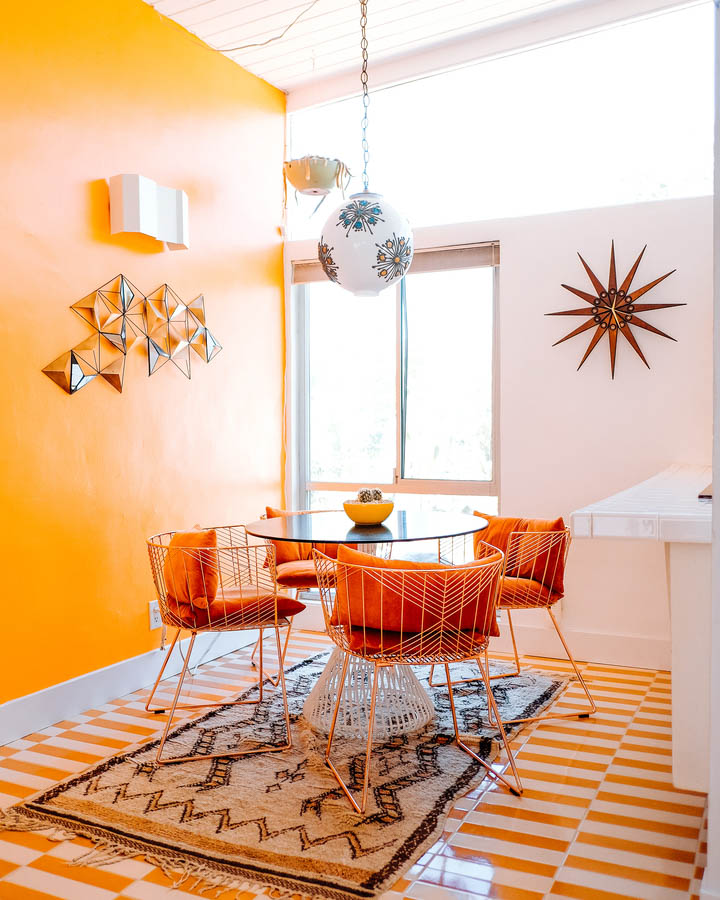 PHOTO COURTESY OF DANI NAGEL
Not one to shy away from using color, Nagel leaned into it big time with this Mid-century Modern home, going with a color story of citrus orange, yellow and sky blues. And while she went bold with color on the walls, doors, textiles and flooring, she kept the ceiling and beams white, to reflect the light that comes in from the architect Krisel’s original clerestory windows. The home, built in 1959, features a gallery wall stationed on a red and white patterned wall covering that highlights Nagel’s grandmother’s original artwork. Walls are painted in bold orange and tangerine and serve as vibrant jumping off points for Nagel’s electric blue velvet furniture.

Life in Color with SUPERBLOOM

Adding to the colorful and creative vibrancy of the Palm Springs community is Superbloom, a lifestyle and clothing company that sells custom painted hats, socks, packs and more using Dunn-Edwards paints to color its products. Founders Alexis and Chris Ramirez believe that color is an essential expression of life, particularly in the desert, and have chosen ten colors that represent guiding principles of Superbloom’s ethos. They bring a thirst for sustainable fashion and eco-conscious practices to their production line, and their staple item is a fashionable wide-brimmed gaucho style hat called the Sombra Del Sol. 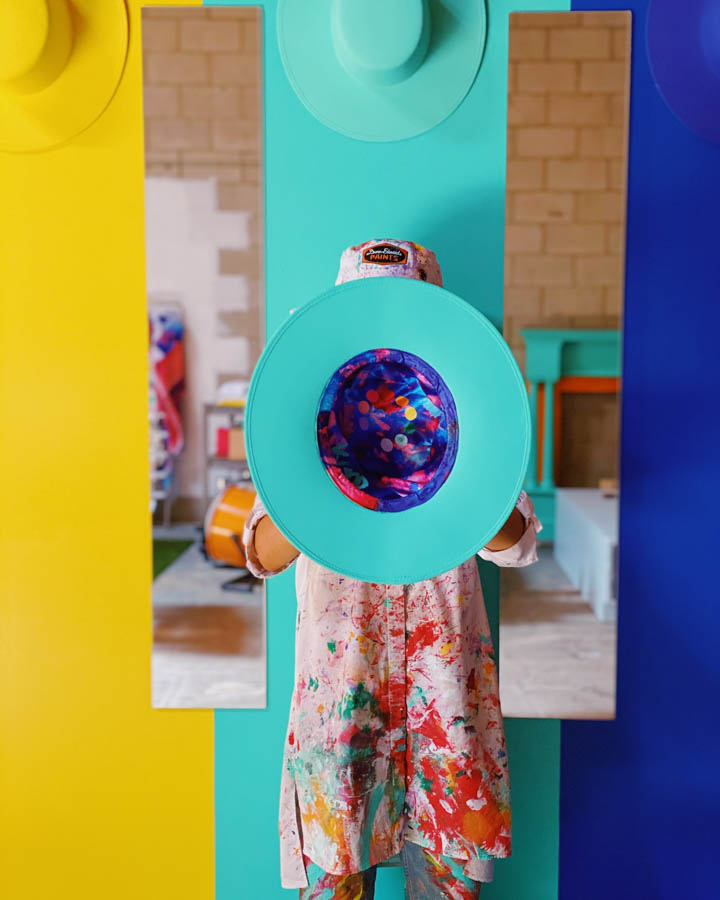 Just to the southwest of Palm Springs lie the Santa Rosa Mountains, alongside the San Jacinto mountains. The Santa Rosa Mountains provide a picturesque backdrop for the desert cities of the Coachella Valley, one that muralist John Cuevas finds infinite inspiration in. In fact, the mountain’s deep blackberry purples and cotton candy pinks gave Cuevas his palette when he was commissioned to paint a mural on the exterior of the La Quinta public library. Some of the prominently featured colors include Rosy Cheeks (DE5062), Preserve (DEA193) and Below Zero (DE5835). 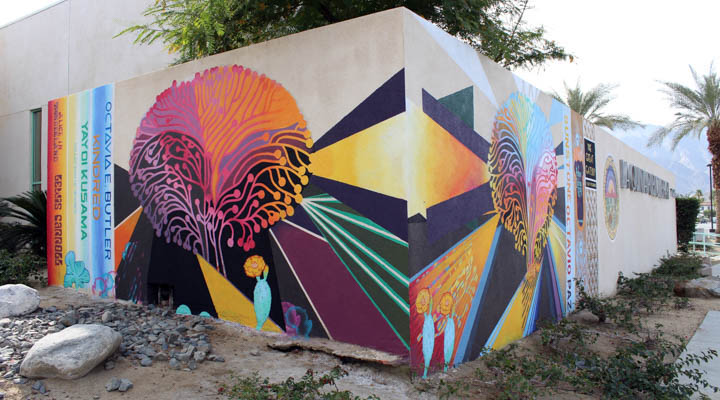 PHOTOS COURTESY OF JOHN CUEVAS
Restoring Modern Architecture with BoldeeAnn McCoy of Thomboy Properties were surprised to find a 1975 Hal Lacy-designed home that languished on the market for four months. They snapped the property up and renovated it, painting the ceiling and beams in a white to highlight the height of the ceiling, while choosing accents of bold colors in Dunn-Edwards hues. One such color, Pink Dahlia (DET419), covers the 10-foot-tall front doors, making a strong, impactful entry statement. 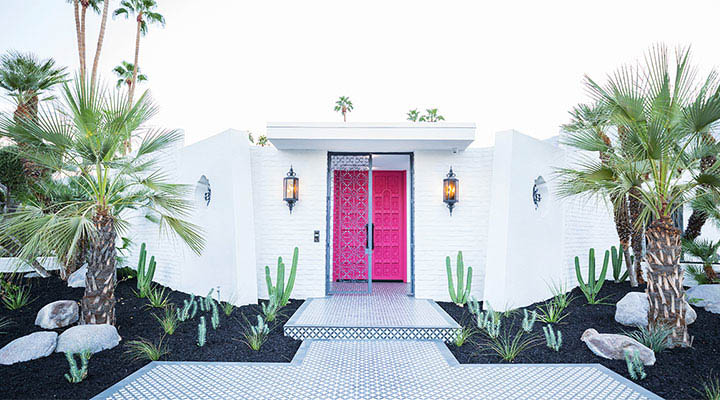 PHOTO CREDIT: FRED MOSER
Artists don’t just dig Palm Springs though — they’re setting down roots in other areas of the region like Claire Thomas and Tom Windeknecht who call nearby Yucca Valley their home. This Most-Searched Design Style Is Perfect for Fall