Murals can breathe new life into public spaces, especially when they use vibrant colors and creative themes. One might even say that murals are conduits, helping to conduct the electric, or creative energy of a city or neighborhood. It’s a belief artist John Cuevas holds dear. In his new mural at the public library in La Quinta, California fittingly titled “Volta," Cuevas channels that energy of the city and the site by melding together art, literature and nature. With the mural’s site being a library, the artist wanted to represent books in order to connect the mural to its location. The titles of which are both classic and adventures: The Great Gatsby by F. Scott Fitzgerald, The Picture of Dorian Gray by Oscar Wilde, Sunstone by Octavio Paz, Kindred by Octavia Butler, Collected Works by Yayoi Kusama, and Alice's Adventures in Wonderland by Lewis Carroll. Each of the titles has a link to the mural’s overall theme. In the case of Wilde’s Dorian Gray, Cuevas notes, “I liked that representation is fluid in this book. It fits in with the amorphous identity of the brain on display [in the mural]. Whose brain is it?” 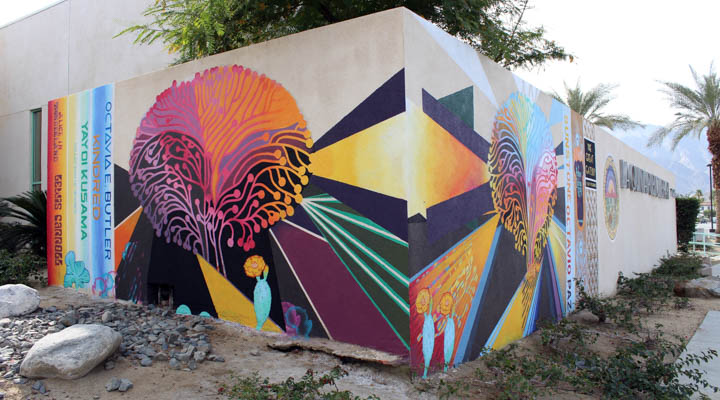 The brain patterns seen on Volta are meant to reference the very source of creative energy. “[The mural] follows an organic eminence from the brain symbols to shape and fracture the architecture into its surroundings,” explains Cuevas. “The mural sprawls across two converging walls which I like to think of as a fault line, a location where energy is potential and kinetic,” he continues. As a whole the work of art flows into the Santa Rosa Mountains, and its litany of deep blackberry purples that are often set against a cotton-candy-pink sunset sky.

It’s from those colors seen in the Santa Rosa Mountains that Cuevas drew his color inspiration. “Even in the mid-summer sun, the desert is a scorching golden backdrop for some of the most resilient plants on earth, like the blue gleaming Jojoba leaf, or the chartreuse tinted Creosote caper berry,” he says. Typically, Cuevas says he mixes custom colors himself, but he was able to find the exact shades he needed in the Dunn-Edwards color library. Some of the prominently featured colors include Mink (DE6392), Vibrant Honey (DE5314), Rosy Cheeks (DE5062), Preserve (DEA193) and Below Zero (DE5835). “I can find every color I would have mixed myself, except it’s faster and with no volatile organic compounds,” he says of the Dunn-Edwards collection.