Exploring History Through Color
We connect colors with aspects of geography, culture and of course, history. In fact, as color defines or is associated with a particular design aesthetic, it also becomes associated with aesthetic’s time period. For example, think of the dusty pinks and warm neutrals of this decade’s boho aesthetic; mustard yellows and rusty oranges of 1970s style; or the gem tones of the Art Deco era. This strong connection between color and time is precisely why Dunn-Edwards’ Then, Now and Forever® Collection, a set of 142 historically-accurate and 158 trending paint colors, was created.

Our historically-accurate collection of colors was inspired by vintage architecture throughout the American West, and these colors were carefully matched to actual samples from historic buildings and sites. To do this, we worked with Architectural Resources Group (ARG), a group of architects, planners and conservators who believe in the value that history adds to modern life, and work specifically in preserving historic structures. One architectural resource from which our historically accurate colors were pulled is Barnard Hall of San Francisco’s Presidio. 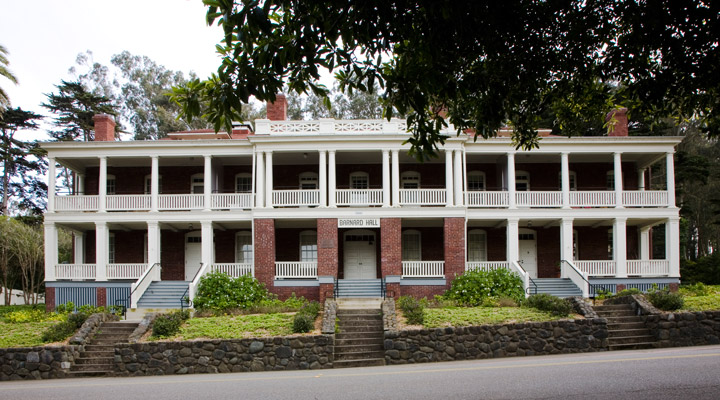 Historically Accurate Paint Colors
To help curate our 19th-century Revival-era and Victorian era colors, one of the architectural resources of the American West we looked to was Barnard Hall, located in San Francisco’s Presidio. ARG, through meticulous conservation work, pulled colors by carefully reviewing historic color cards, chiseling and pulling samples from Barnard Hall and testing them. Dunn-Edwards worked closely with ARG to ensure that each paint color was truly historically accurate. ARG’s samples were then matched to Munsell Color System color chips, after which, Dunn Edwards’ color lab created paint formulas for Dunn-Edwards’ color expert, Sara McLean, to have the final say on inclusion in the color collection.

Historic Colors of Barnard Hall
The Presidio, located on the tip of the San Francisco peninsula, is a former, long-standing military installation. Originally established as Spanish fort in the 1700s, the Presidio eventually became a US Army post in 1848. No longer used for military purposes, the Presidio is today, a large park run by the Presidio Trust and the National Park Service.

Barnard Hall is a Colonial Revival style building located within the Presidio. It was built in 1912 and originally served as bachelor officers quarters (although today it is an apartment building). Barnard Hall was named for John G. Barnard, an engineering officer in the US Army from 1833–1881. During his tenure, Barnard served as the Superintendent of the United States Military Academy and also as a general in the Union Army. Barnard Hall’s historic paint colors are a simple scheme consisting of a deep, midnight blue and a soft yellow, both were found on the building’s interior.

Mackintosh Midnight (DET579): This dark, mysterious blue is named after Charles Rennie MacKintosh, a Scottish designer, architect and artist of the UK’s Art Nouveau movement. The movement began in the mid-1880s, therefore overlapping with the 19th-century Revival architectural period of which Barnard Hall is a part. MacKintosh’s designs were influenced by his Scottish upbringing, blended with the flourish of Art Nouveau and the simplistic forms of Japanese design.

Suffragette Yellow (DET487): The name Suffragette Yellow was inspired by the women's right to vote movement in the 19th and 20th centuries throughout Europe and America. Suffragettes who fought for the vote in the United States adopted yellows, golds, and white as their colors.This yellow was also found in the Bidwell Mansion, another of our historic resources explored in conjunction with Dunn-Edwards Then Now and Forever® Collection.

For more background on how the West’s various architectural icons have informed the colors in the Then, Now & Forever® Collection, take a look at our guide to 20th-century Revival architecture. And learn more about the specific architectural resources which inspired the rest of the collection like the homes of Cliff May and the historic Mission Inn.