Blue is the color of the sky, large bodies of water, probably more than one wall in your office, and perhaps even a number of your outfits. This ever-so-popular color has not always been so common. In fact, much of the science and history of blue might surprise you.

What color is blue?


Sight is integral to the human experience. When one thinks of sight and color, the two go hand-on-hand. Yet, it seems that not so long ago in history, colors were far less important to the human experience than they are today. When reading through Greek texts, historians have noted many strange color descriptions. In the Odyssey, for example, Homer makes hundreds of references to white and black, but colors like red and yellow are only mentioned a few times. The color blue, it turns out, is never mentioned. Instead, the author uses descriptions like "wine-dark" to describe blue items such as the sea.

Digging a little deeper into the history of blue, historians concluded that the word "blue" did not even exist in Greek times. It seems this color was barely distinguished from "neutral" shades like white, light and dark. Read all of the Greek texts you can find, and you'll never come across a word for "blue." It simply was not important enough to deserve its own descriptor.

Even as the English language developed, blue took a distinct backseat to other colors. The first color words to appear in English, and most other languages for that matter, were words for "white" and "black." Next, red, the color of wine and blood appeared, followed by yellow and then green. Blue appeared last. 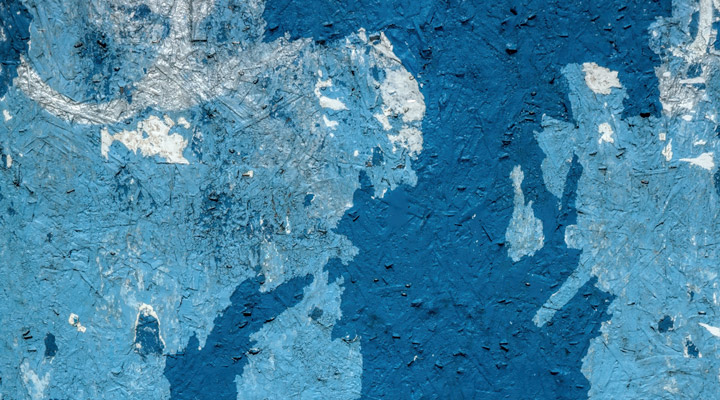 Is Blue a Color Early Humans Could See?

If you think about it, there is not a lot of blue in nature. Most people do not have blue eyes, blue flowers do not occur naturally without human intervention, and blue animals are rare -- bluebirds and bluejays only live in isolated areas. The sky is blue -- or is it? One theory suggests that before humans had words for the color blue, they actually saw the sky as another color. This theory is supported by the fact that if you never describe the color of the sky to a child, and then ask them what color it is, they often struggle to describe its color. Some describe it as colorless or white. It seems that only after being told that the sky is blue, and after seeing other blue objects over a period of time, does one start seeing the sky as blue.


Additional support for this theory comes from studies of an ancient Nambian tribe who does not have separate words for the colors green and blue. When shown a set of squares, 11 of which are green and 1 of which are blue, members of this tribe cannot identify the blue square from the green squares. Thus, it seems that since there was no word for the color blue, early humans did not really notice it.

How is blue made & when was the color invented?


Scientists generally agree that humans began to see blue as a color when they started making blue pigments. Cave paintings from 20,000 years ago lack any blue color, since as previously mentioned, blue is rarely present in nature. About 6,000 years ago, humans began to develop blue colorants. Lapis, a semiprecious stone mined in Afghanistan, became highly prized among the Egyptians. They adored the bright blue color of this mineral. They used chemistry to combine the rare lapis with other ingredients, such as calcium and limestone, and generate other saturated blue pigments. It was at this time that an Egyptian word for "blue" emerged.

Slowly, the Egyptians spread their blue dyes throughout the word, passing them on to the Persians, Mesoamericans and Romans. The dyes were expensive -- only royalty could afford them. Thus, blue remained rare for many centuries, though it slowly became popular enough to earn its own name in various languages.

The Modern History of Blue

The history of blue as a color for everyday man began when the Catholic Church made an important move in the year 431 AD. At this time, the Church decided to color-code the saints, and Mary was given a blue robe. Over time, the shade of blue that Mary wore became what is now known as "navy blue." Because Mary stood for innocence and trustworthiness, the color blue was seen as a positive light. This same navy blue was adopted by militaries and police to convey a similar essence of trust.

As navy blue became more popular among authorities, people began to associate it with the idea of authority. Thus, different shades of blue needed to be developed in order to convey the color's original peaceful, subdued meaning. Robin's egg blue and pale, powder blue were developed for this purpose.

The history of blue as "the color for boys" is an even newer notion that primarily arose after the post World War II baby boom. It came about as a marketing scheme, as manufacturers could sell more clothes if some were distinctly for boys, and others were distinctly for girls.

Now, like the ancient Egyptians, people adore the color blue. It is used widely in interior design and fashion, and not only is there a word for blue -- there are hundreds of words for various shades.

Visit our Dunn-Edwards website for more information about using blue in interior design as well as other color innovations.