The California Missions: History and Design

The 21 California Missions, religious and military outposts established by Catholic priests of the Franciscan order, have had a profound influence on American architecture, inspiring turn-of-the-century design styles such as Mission Revival, Pueblo, and Craftsman. These ornate and stately missions infuse their interiors with natural light and reflect Spanish, Native American and Mexican influences. While no two missions are identical, each are influenced by several factors, those being the limitations in the construction materials that were on hand, an overall lack of skilled labor, and a desire on the part of the founding priests to emulate notable structures in their Spanish homeland. Showcased below are 4 of the 21 missions, each of which have shaped Californian architecture and design today. 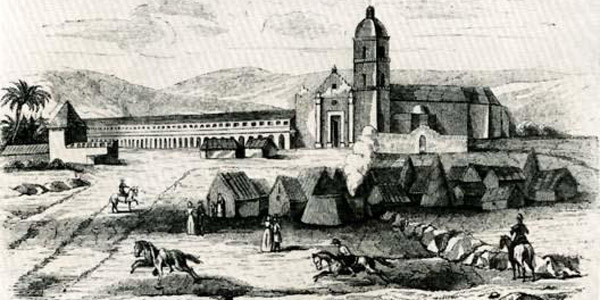 Mission San Juan Capistrano , located in Orange County, is commonly referred as “Jewel of the Missions" due to its rustic beauty. Founded in 1776, this Spanish mission has the distinction of being home to the oldest building in California still in use, its chapel. The mission originally had six buildings, including the grand church which was destroyed in an earthquake and never rebuilt. The remaining walls act as background to the mission's lush gardens, boasting adobe bricks and tiles, prominent arches, and a bell tower. 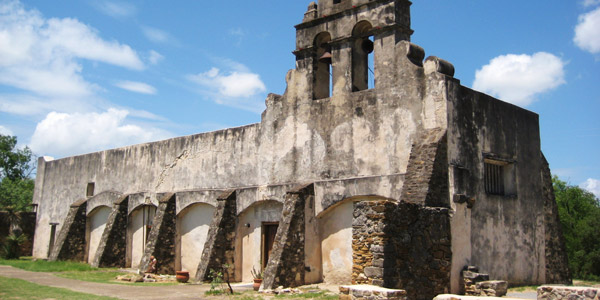 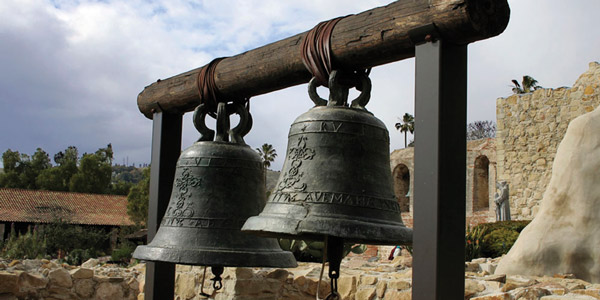 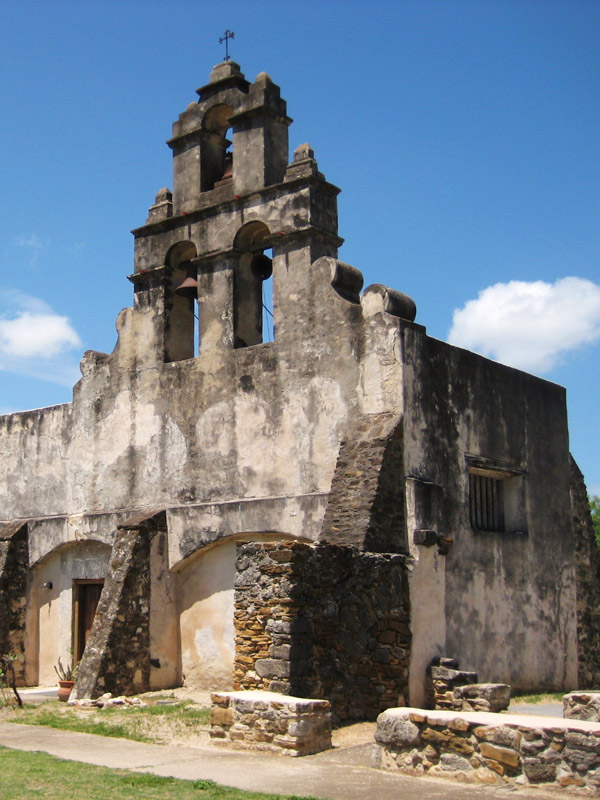 Located in Ventura, California is the Mission San Buenaventura, a Spanish mission founded by the Franciscan order in 1782. Its façade is traditional, yet distinguished by a unique triangular design, which most likely represents the religious symbol of the Holy Trinity. The façade arches are flanked by flat ornamental stone columns, with the curved lines above the entry door representing two rivers that pass on either side of the mission. A heavy stone buttress is placed to the left of the main entrance to give support to the structure, while a single tall bell tower is placed to the right. The plaster exterior and exposed wood beam ceilings present here have heavily influenced Mission-Style homes of the 20th century. 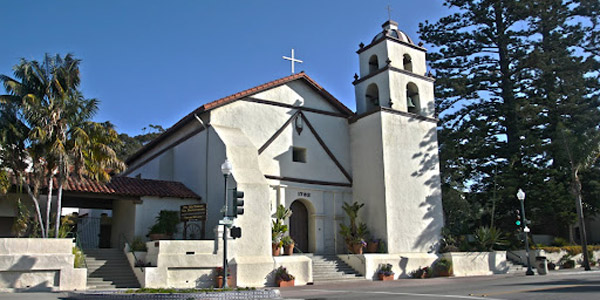 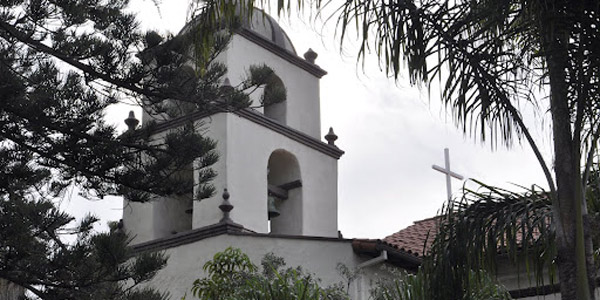 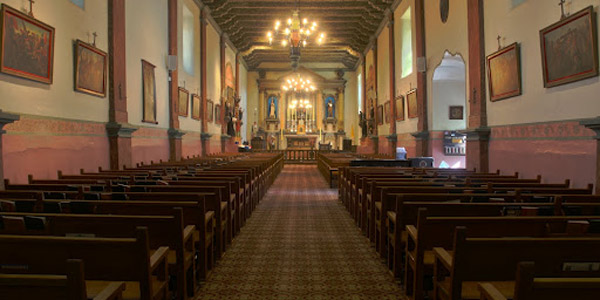 The San Luis Rey Mission Church, located in Oceanside, California, is among the finest existing examples of Spanish-Colonial architecture in all of the State. The building is one of only two cruciform (cross-shaped) churches ever built by the Spanish in the region, and is a National Historic Landmark. The main walls of the church are 30 feet high and five feet thick with an adobe interior and baked brick exterior, with white lime plaster coating the walls. The main façade of the church features a mix of Baroque and Classical styles including a 75-foot tall bell tower at its eastern corner. Both the original floor and roof of the mission church were of terra cotta tile, and by 1829, a wooden dome sat atop the building. The restored dome remains today and is unique among all of California's Spanish missions. 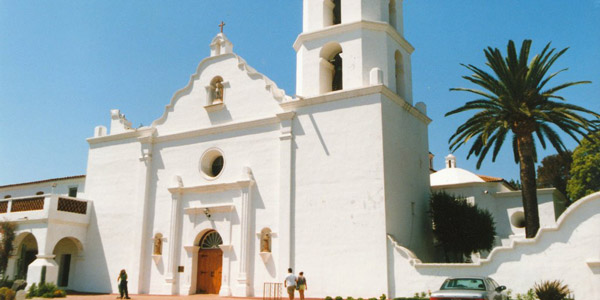 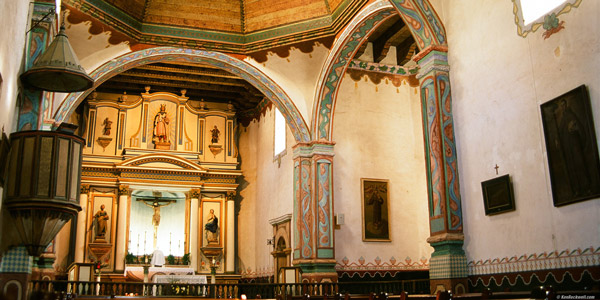 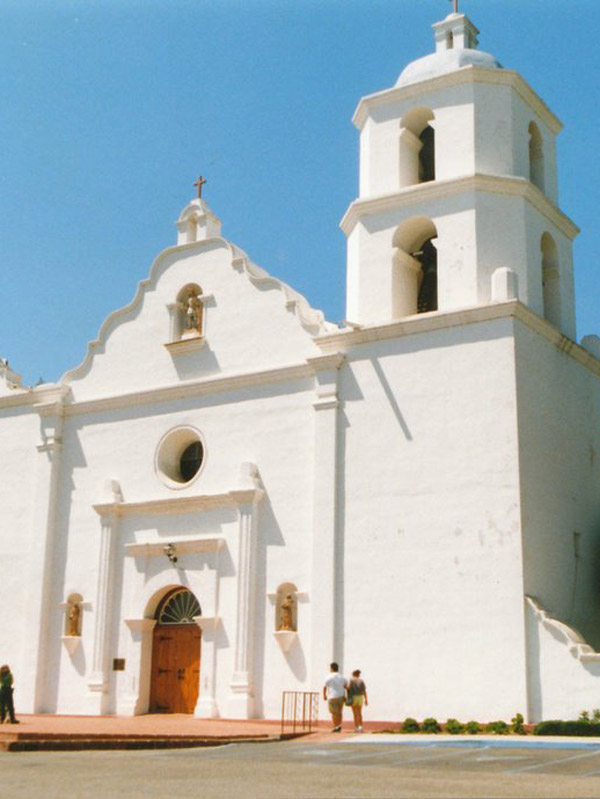 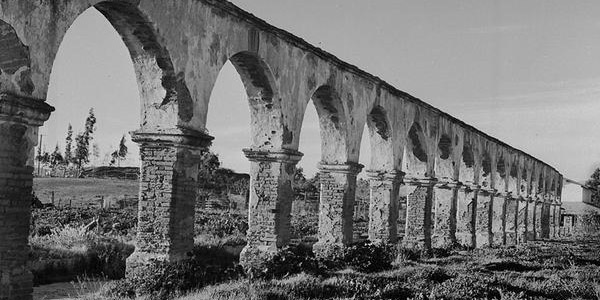 Mission San Antonio de Padua, a Spanish mission established by the Franciscan order in present-day Monterey County, California, is the third of California's 21 missions. It was the first structure to make use of fired-tile roofing in Upper California, a practice that is widely done today. The extensive restoration and unspoiled setting of San Antonio de Padua makes this one of the most picturesque missions in California. Adjacent to the church portico is an arcade with three arched openings and fashioned from burned brick, giving the mission a unique appearance. The facade is flanked by two square bell towers, with a larger alcove above the center arch. 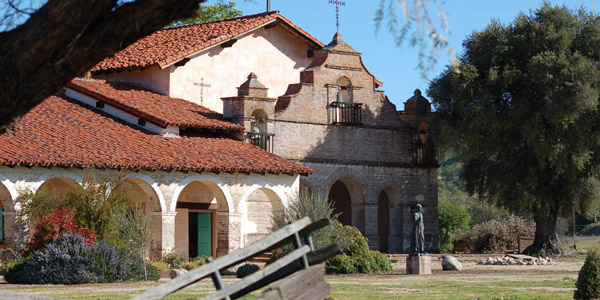 For more information of the 21 Missions of California, please visit http://www.missionscalifornia.com/

All images used with permission.