Santa Barbara is a jewel of historic architecture and there is so much to see. If you’re looking for some design inspiration this summer, travel to Santa Barbara, Calif., to take in the sights of this Spanish-Mediterranean coastal town. Focusing on some key Spanish-Colonial architecture in the downtown area of Santa Barbara, here is a day tour to try, starting with Mission Santa Barbara, and then heading downtown to stroll by other architectural highlights.

Begin your tour by driving to the Mission Santa Barbara.

Mission Santa Barbara, located at 2201 Laguna St., is a key part of the history of Santa Barbara and the 10th of 21 missions founded in California. Mission Santa Barbara was founded by Spanish Franciscan friar Padre Fermin Lasuen on the Feast of Saint Barbara, Dec.4,1786. Nicknamed the "Queen of the Mission", it was listed as a national historic landmark on Oct.15,1966. The Mission is the top historical and cultural landmark of Santa Barbara and houses Franciscan friars, a church, museum, gift shop, and a cemetery on the 12-acre property. The Mission was severely damaged in the earthquake of 1812 and rebuilt and dedicated in 1820. In 1925, another earthquake severely damaged the towers of the Mission, and the building was subsequently renovated in 1927. The interior of the church has not changed much since 1820, offering a beautiful display of religious paintings and frescoes that line the walls around the church pews. The walls are a warm brown and cream, and the flooring is terra-cotta. The front of the church, where the pulpit is, showcases several religious figurines, candlesticks, a chair and two side pulpits. In addition, the wall behind these pieces is lined in colorful molding details.

The exterior of this Spanish-Colonial-style building is soft cream and rose-pink adobe, white-washed stucco topped by a red-tile roof, typical of Santa Barbara architecture. There are heavy, dark brown wood beams, and the building itself is a long one-story building with a colonnade that allows visitors places to stand and sit out of the sun.

The chapel or place of worship is an impressive tall adobe-brick front structure with a heavy wood door and six rose-pink columns extending the full height of the church - from the base to the top molding. There are also two bell towers, one on either side of the center part of the building. On top of the bell towers are crosses. There is a large area of pavement out front that show fading chalk drawings from the Memorial Day weekend's i Madonnari festival. Beyond the pavement is the park area with grass, trees and plants that are lush and green, showcasing the beauty of the property. 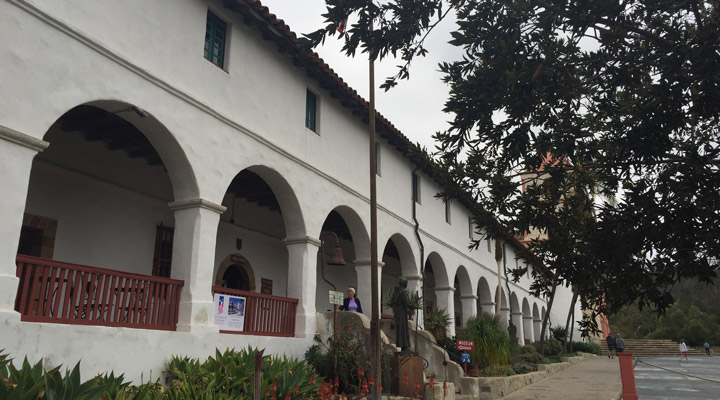 Once you've enjoyed all that the Mission has to offer, drive to downtown Santa Barbara and walk around the area, starting with Casa de la Guerra, which is between State and Anacapa streets.

Casa de la Guerra, part of the Paseo de la Guerra, is located on E. de la Guerra Street, and was constructed between 1819 and 1827 by the fifth Presidio comandante, Jose de la Guerra, one of the wealthiest and most influential citizens of Santa Barbara. This building was listed as a national historic landmark, along with El Paseo, on Feb. 22, 1977. This historic U-shaped Spanish-Colonial adobe has an interior courtyard, consisting essentially of dirt with a couple of olive trees, which can be set up for entertaining.

The building itself is white-plaster that was white-washed, with red roof tiles, terra-cotta tile floors and heavy dark brown wood beams extending to a covered porch on the interior courtyard side. There are antique wood benches, similar to the ones at the Santa Barbara Mission, as well as a painting in a scroll or manuscript-style pattern to signify that it is a historic building. Many of the historic buildings downtown have this same scroll-style copy to signify historic buildings. The doors are heavy, dark brown, wood doors in a very simple design with a large cross beam, original to the architecture. There are also spindles in dark brown wood over the windows and dark brown shutters. The base or foundation of the building consists of local stone. 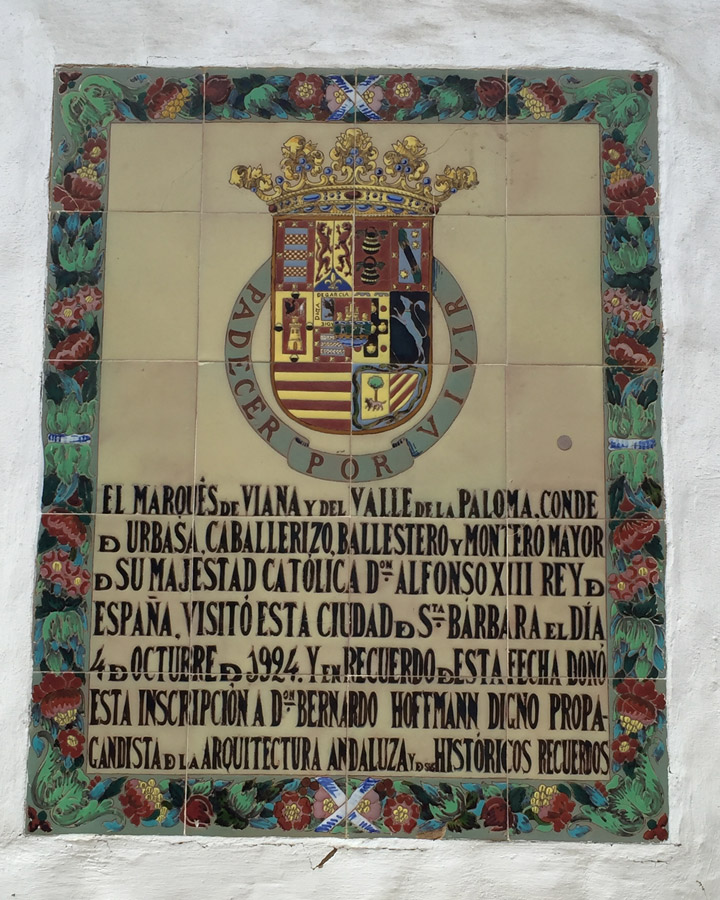 On the exterior side of the building, the opposite side of the inner courtyard views, are several colorful tile mosaic artworks describing commemorations in Spanish and English. One states. "In commemoration of the
visit of the ship 'Alert' to Santa Barbara in January 1836 at which time Richard Henry Dana was entertained in this house as described in 'Two Years Before the Mast." Another states, "In commemoration of the visit by
His Royal Highness, the Prince of Asturias, Prince Felipe de Borbon Y Grecia, descendant of King Carlos III, son of King Juan Carlos and Queen Sofia and heir to the Spanish throne, to our city and it 18th century birthplace El Presidio de Santa Barbara. Santa Barbara. June 1995."

Before moving on, look across the street at Plaza de la Guerra, where the first city council met in 1850. Next to the plaza is the city hall and Santa Barbara News-Press offices. Continue on the tour by finishing the walk around the exterior of Casa de la Guerra to see all the shops at the El Paseo complex. 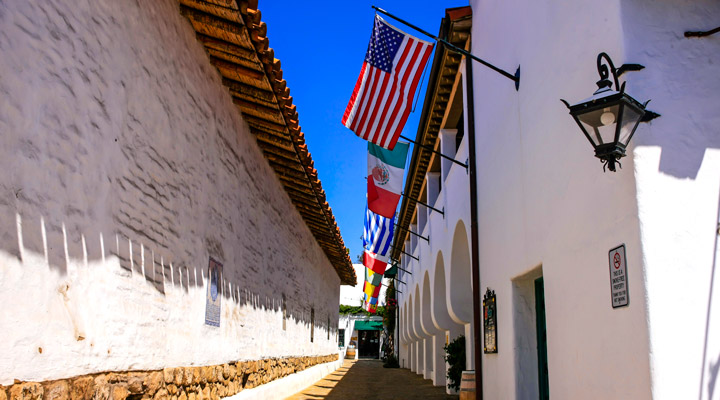 After the Casa de la Guerra was constructed, in 1860, a one-story mercantile brick building was constructed nearby. Then, in the 1870s, a two-story mercantile complex was built that faces State St. In the mid-1920s, the complex was turned into shops, integrating the Casa de la Guerra adobe, and was designed by local architect Lutah Maria Riggs, an associate of architect George Washington Smith and one of the first female architects in the United States. Today, there are restaurants; a museum (Museum of Contemporary Art); and boutique mall with shops such as El Paseo, a Mexican restaurant located at 813 Anacapa St., Jamie Slone Wines and The Bodega-Standing Sun Wines, and James Main Fine Art - all located in the complex.

Walk back through El Paseo walkway to De la Guerra Street, turned left and walked toward Anacapa Street.
On the left side are the Orena Adobes.

The Orena Adobes, an adobe building complex, are located at 27-29, and 39 E. de la Guerra. The oldest of the adobes, 39 East de la Guerra, was constructed in 1849 by Don Jose de la Guerra and was originally used to house supplies brought in from the ships at the local harbor. Don Gaspar Orena bought the adobe in the mid-1850s and built a 1-1/2 story adobe next door in 1858, 27-29 E. de la Guerra, which became the family home. He kept 39 E. de la Guerra for commercial purposes. Eventually, the home became the fall and winter home of the Orenas and is still owned by their descendants. 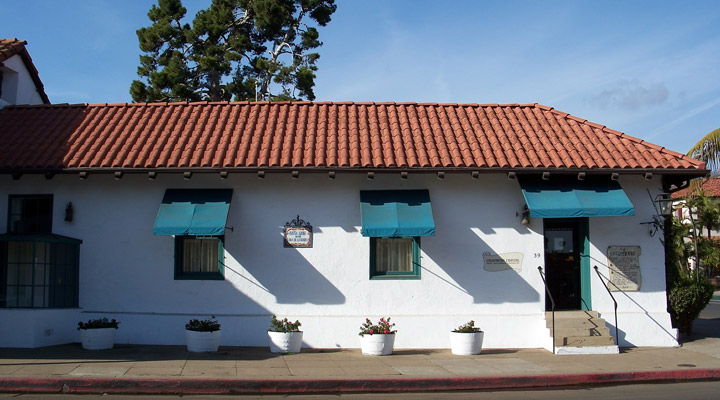 Architecturally, the Spanish-Colonial adobe is white-washed plaster over brick with heavy wood beams in the same manner as Casa de la Guerra, terra cotta floors and turquoise-colored doorways. The address is
painted in historic scroll writing, as are several of the historic buildings, noting the tight architectural guidelines held to by the Santa Barbara historic commission.

From there, take a left and walk down Anacapa St, and, to the right, is the Santa Barbara United States Post Office.

Santa Barbara United States Post Office, located at 836 Anacapa St., is a Mission Revival-inspired, Art Deco-style building. It was designed by Pasadena architect Reginald Davis Johnson and completed in 1937. The building was listed as a historic national landmark on Jan.11,1985. There have been minimal interior changes and no exterior architecture changes, including the landscaping, so the building has maintained its architectural integrity through time. 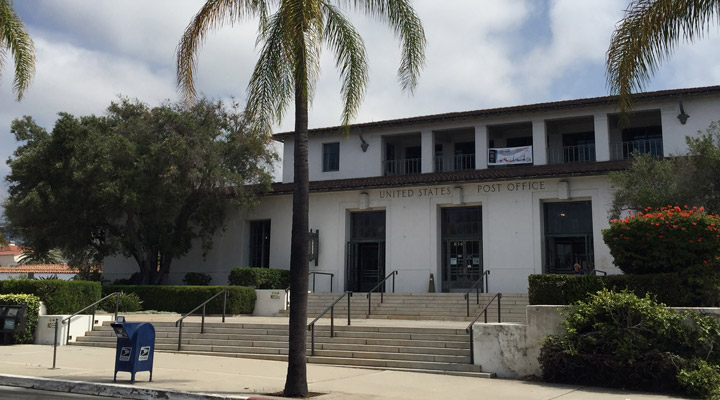 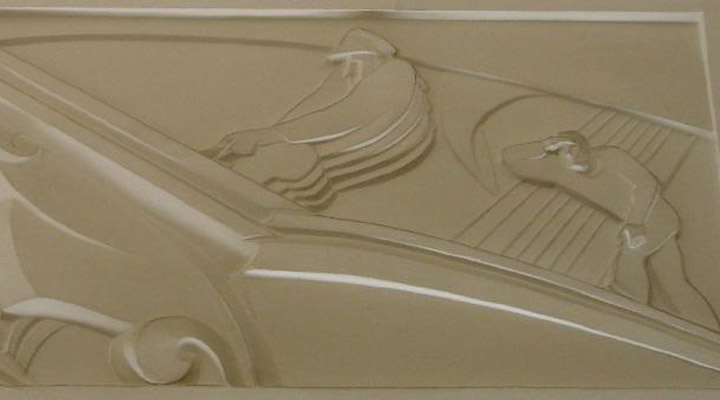 The exterior has Spanish-Colonial-style characteristics with the red roof tiles and white-stucco brick. The Mission Revival characteristics include other exterior architectural details, including the second floor balcony and dark brown beams. The Art Deco characteristics are in the details including the chevron patterns in the keystones above the doors and exterior lanterns at the entrance; bronze doors; the interior light fixtures; building hardware; and reliefs in the Streamline Moderne design aesthetic on the interior by artist William Atkinson (American, Los Angeles, born 1913) that are of typical Depression-era motifs from the 1930s New Deal. These include men working on a railroad line and a cowboy riding a horse. The title of the relief series is "Transportation of the Mail," so the reliefs show all the ways the mail has been delivered in U.S. history up to that time period.

Walk to Cabrillo Street, take and left to get to State Street, then take a right on State Street and walk two blocks to the Santa Barbara Museum of Art on the right side of the street.

Santa Barbara Museum of Art, a Spanish-Colonial-style building, located at 1130 St, was founded in 1941 in the building that used to be the Santa Barbara Post Office from 1914 to 1932. Chicago-based architect David Adler simplified the building exterior and added museum galleries in the interior, including Ludington Court at the entry of the museum. The museum then expanded in 1942 with the addition of the Stanley R. McCormick Gallery and the Sterling and Preston Morton Galleries in 1963. The Alice Keck Park Wing opened in 1985, and the Jean and Austin H. Peck, Jr. Wing opened in 1998 - both significantly expanding the museum. It is currently undergoing a massive renovation of its second floor galleries, but it houses a permanent collection of more than 27,000 works of art focused on art from Asia, America and Europe. 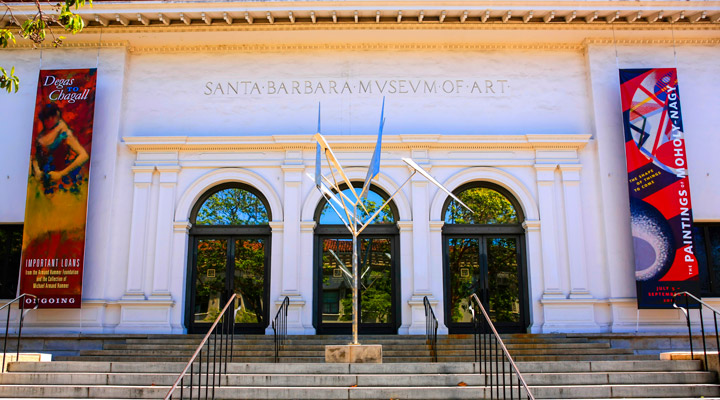 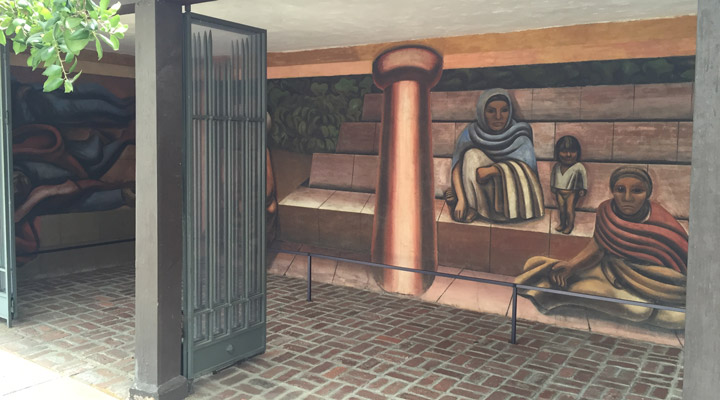 Architecturally, the building exterior has the red-tile roof that typifies Santa Barbara architecture, along with three arched doorways of white stone at the front of the museum for the public to enter and exit. This stone entrance protrudes from the main body of the exterior. The main body of the building is white stucco or plaster that is in line with other typical buildings of historic downtown Santa Barbara. There is a contemporary sculpture at the top of the stairs before entering the main entrance, and there is also an amazing public mural to the right side of the building, by artist David Alfaro Siqueiros, which displays the plights of Mexicans in history.

Outside the museum entrance, take a right and walk up Anapuma Street to Anacapa Street and cross the street to the Santa Barbara County Courthouse, the crown jewel and final stop of this tour.

Santa Barbara County Courthouse, located at 1100 Anacapa St., was completed in 1929 and listed as a national historic landmark on Jan.23,1981. The courthouse is a Spanish-Moorish architectural jewel with an 80-foot clock tower. The interior of the courthouse has hand-painted ceilings, room-size murals, historic oil paintings, an abundance of Spanish tiles and ornate doors and ironwork.

The second floor houses most of the spectacular murals in an historic courtroom.The murals envelope the entire room in scenes of early California settler days, with Spanish, Mexican and American involvement. Gorgeously colorful and ornate, the room beckons you to sit in the room for awhile to enjoy the details, including an intricately-painted ceiling with hand-painted wooden beams.

Continue walking up to the fourth floor or the clock tower for amazing views of the Santa Barbara downtown, mountains and ocean. When finished, walk back down and through the breezeway of the courthouse to enter a large courtyard with lush green landscape and a view of the other side of the large courthouse and tower. 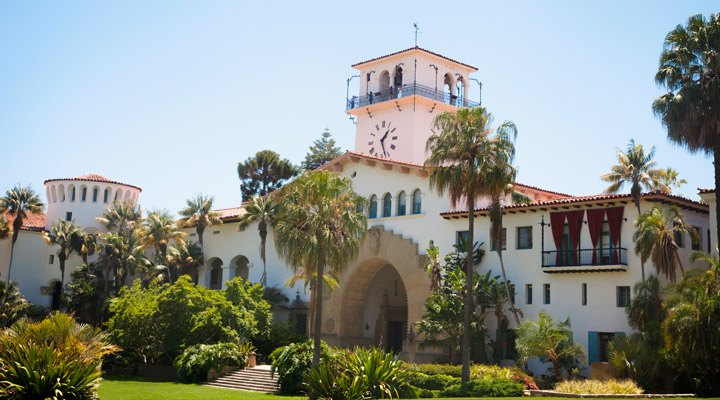 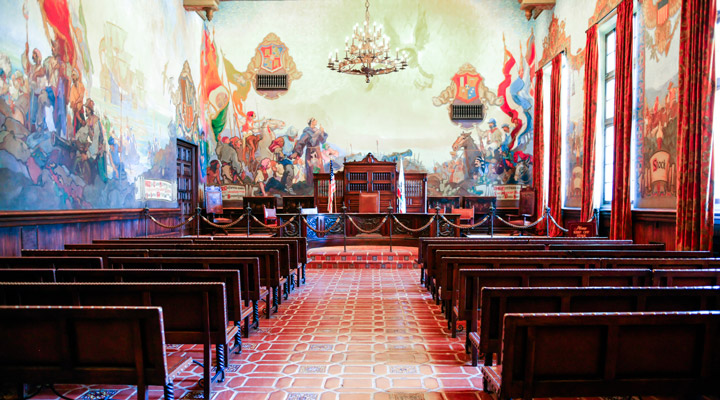 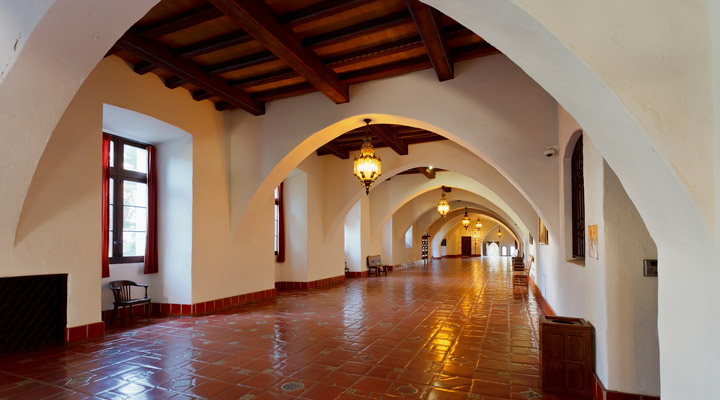 This tour is just an introduction to some of the more interesting landmarks of downtown Santa Barbara, and will prepare you for many more opportunities to explore local design and architecture in this historic, seaside town.