Dunn-Edwards Portraits: Paris, a Pandemic and the Process of Design

The streets of Paris were eerily quiet. No buzz from patrons chatting and imbibing along the city sidewalks. Limited street traffic was to be heard from outside the window. Rather, most of the noise heard inside Marina Edwards’ apartment amid the city’s pandemic lockdown and a 6 pm curfew was the sound of her own voice, practicing her French. 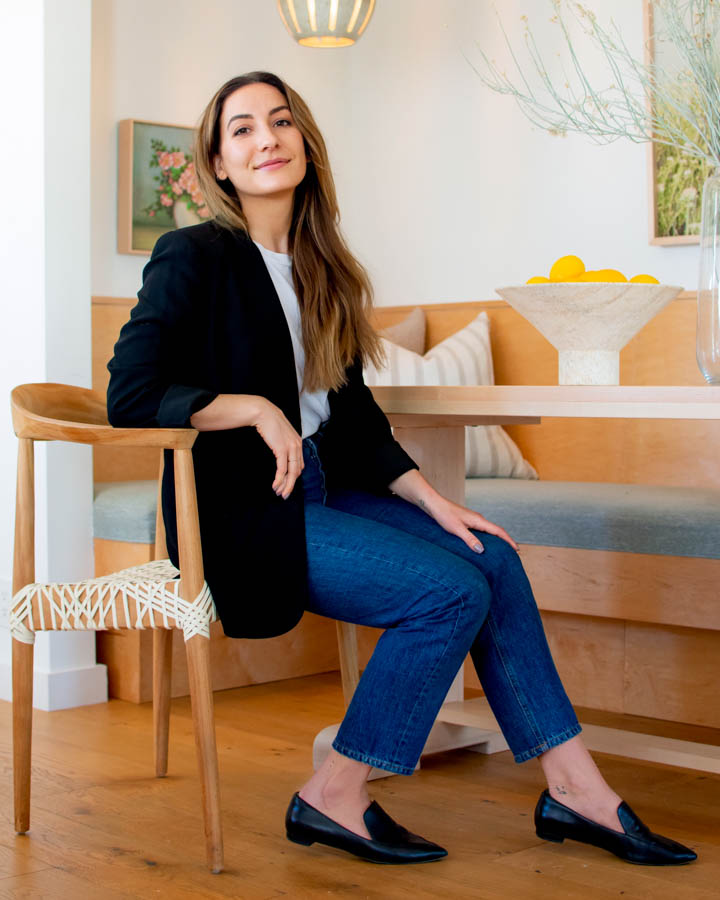 For Pasadena-born and raised Edwards, who was in Paris earning her one-year certificate in interior design at the Paris College of Art (PCA), a year without access to the storied Parisian cafés and famous museums actually provided her ample opportunity to dive head first into her design studies, which also included learning a different measurement system (the metric system is used in Europe) while also learning a new language. It may not have been the Paris experience she envisioned when she enrolled but it was still Paris after all; a place rife with history and classic design, from the iconic Haussmann-style buildings to the sprawling pedestrian boulevards. And as Edwards would learn in her year abroad, it really is more about the journey than the destination itself.

Edwards’ journey toward her design certification was peppered by some fits and starts like it was for so many others. She started her design education at UCLA Extension while simultaneously working in the home-staging industry. She attended classes for a couple of semesters but, “Things didn’t work for me there because of timing,” says Edwards, a sentiment often expressed by other working students. “I cannot speak more highly of the program. The teachers are amazing and, the curriculum is so well developed.” 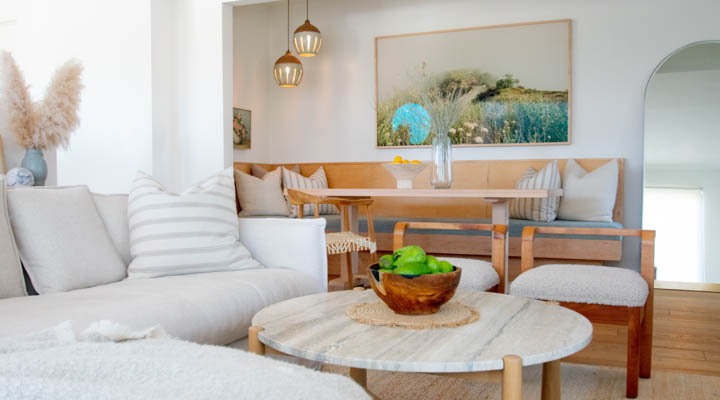 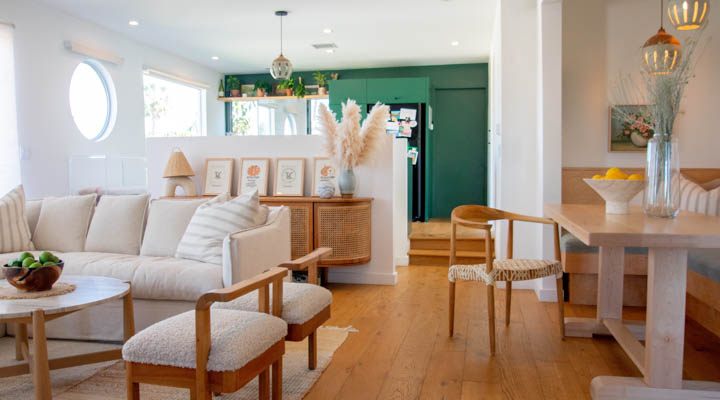 More on Edwards’ journey and her struggles later, but first, a little about her background for context.

Growing up in Pasadena, around some of Los Angeles’ oldest architecture, it’s no surprise that Edwards gravitates toward the historic architecture of Europe and, with her own design practice, now aims to focus on the restoration of historic homes and bring more texture and depth to spaces with antiques. Design and color theory runs deep in her lineage. As the great-granddaughter of Arthur Edwards, cofounder of the Dunn-Edwards Corporation, the younger Edwards watched later generations, including her grandfather, father and uncles, grow the venerable Southwest paint brand to expanded national success. Edwards quite literally grew up within the company’s embrace, starting from the earliest possible point—her mother’s baby shower took place at the Dunn-Edwards office! “Everyone at the Dunn-Edwards headquarters wanted to celebrate, so my mom’s baby shower was held there,” she explains. 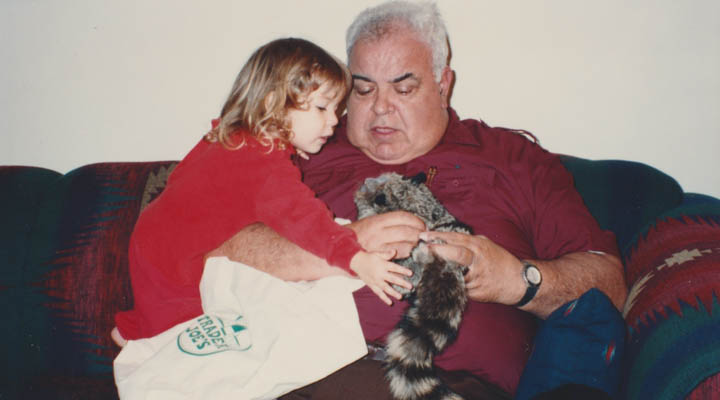 Edwards points to a photo of herself as a young girl at an Arizona Dunn-Edwards store opening and recalls with glee attending the many openings throughout her childhood. “For me as a kid, it was just this giant carnival,” she says. “They used to have these little carnival rides, caricature drawings, pony rides ... it was a family atmosphere, and it brought all the salespeople and contractors together,” she continues. 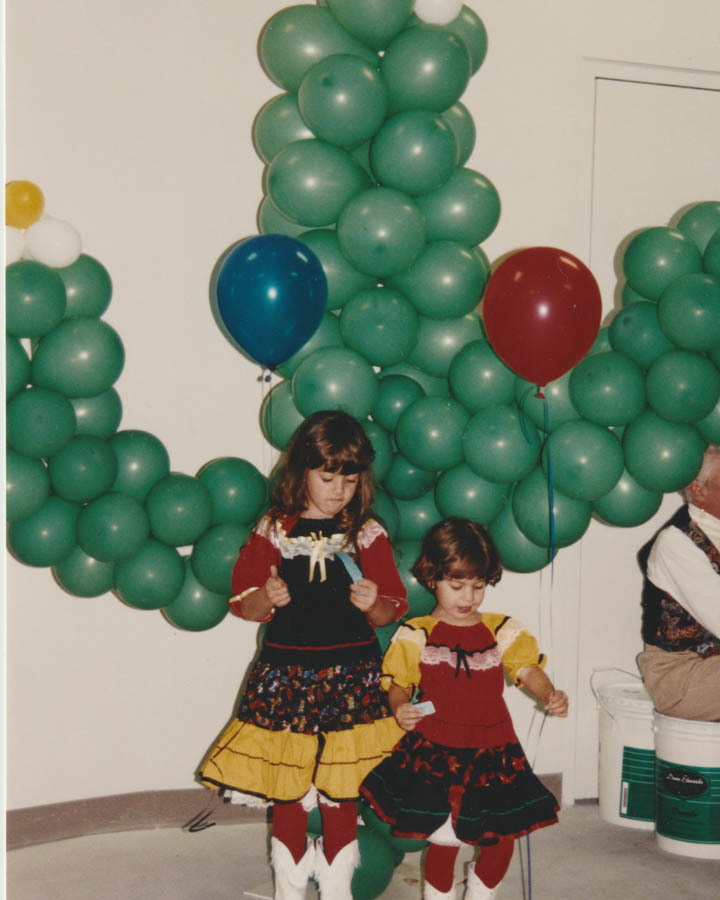 Growing up, Edwards remembers gravitating to design early, often rearranging furniture around her family home and even color matching paint for the redesign of her childhood bedroom. “They called the color
‘Marina Gray,’ and I thought it was the coolest thing in the whole world,” she recalls with a laugh. So when it came to Dunn-Edwards long-standing sponsorship of the Pasadena Showcase House of Design, it’s no wonder Edwards eagerly awaited her parents arriving home each year with the annual booklet featuring the show home. “I was always really interested in seeing the different rooms … the designs were so elaborate and fanciful,” she says.

In particular, she recalls an English Tudor farmhouse with an Alice in Wonderland-themed garden and a Spanish Colonial Revival home replete with impressive architectural details from arches to coved ceilings and intricately carved doors. “The Pasadena Showcase House definitely had a spark of influence in forming my career trajectory,” she notes. And growing up around the family business, she adds, made her keenly aware of the nuances of color and the variety of factors that go into how a color looks on a wall. 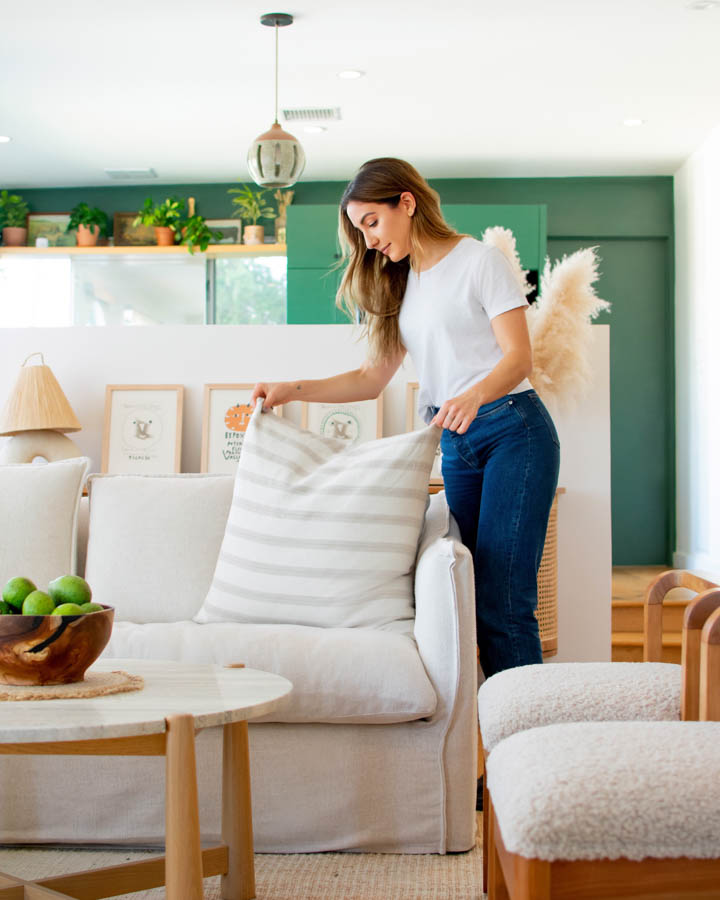 Fast-forward to 2018, as Edwards began to forge her own path, she was assisting at Craft Home Staging, a Los Angeles-based home-staging company, while also enrolled at UCLA Extension. “I saw how challenging it was to balance work and education at the same time,” says Edwards. So after working for Craft Home Staging for three years and her stint at UCLA Extension, she decided to go back and do a full-time program, enrolling at the Paris College of Art for its one-year certificate in interior design. The transition from full-time professional to full-time student, however, was a daunting prospect for Edwards. “I was really intimidated about going back to school. I wondered if I could handle a full-time student workload. But I realized everything has its challenges, whether it’s working full time or school—it was fun and hard,” she explains of the transition.

One of the things Edwards enjoyed most about her program was the emphasis it placed on concept development and the balancing of the sensorial elements within a project. “It's slower-paced, and there’s more emphasis placed on the concept and the history—what is the history of the material, what is the history of the building—rather than just the outcome,” says Edwards, of the difference she experienced between design education in Europe as compared to Los Angeles. 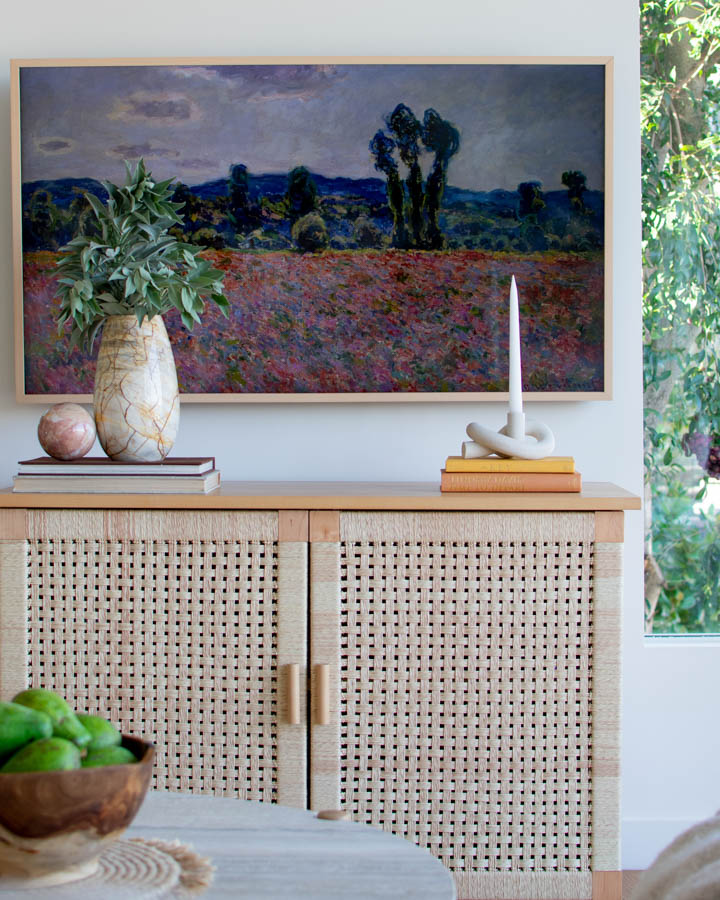 A mentor at PCA, who helped Edwards cultivate a respect for the design journey or process versus the destination, was professor and architect Nikola Meyer. “She will push you to find the most fully expressed form of a concept, but she does it in such a supportive way. There’s never a bad idea … but there’s always an alternative idea,” recounts Edwards. Meyer taught Architectural Components and Project Fundamentals, and “the way she would approach any project is through the sensorial experience of the space,” Edwards notes. In fact, Edwards recalls spending the first half of a semester frequently blindfolded for this sensorial approach—sometimes touching materials, or other times walking through a chapel and experiencing how the acoustics reverberated. Meyer helped Edwards understand the importance of finding her own creative process. And it’s this advice that Edwards wishes to impart to current design students. 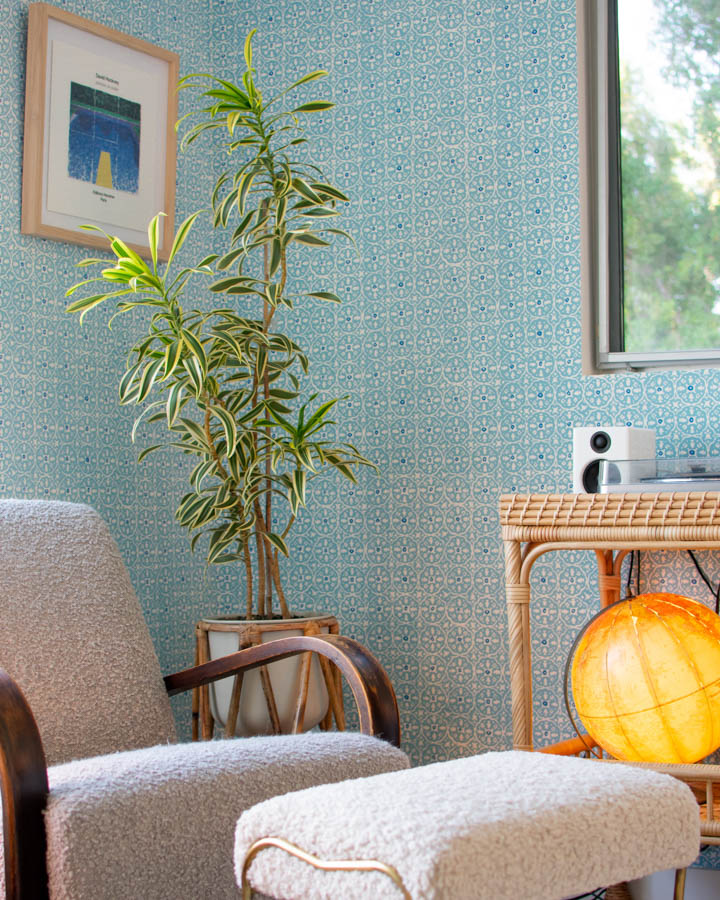 “There will always be a boss or a teacher or a client who will want something a certain way, and just focusing on the outcome can be a trap in so many ways. If you take the time in school to develop your process, that will
show up in every single project you do and give you the confidence to take on different project types and scales.” Edwards also underscores the importance of play and experimentation at school. For example, “collage became a huge thing for me,” she explains “That felt so juvenile or crafty but time and time again my collages had the richest expression of the idea I was trying to convey.”

The respect for the process, as well as the outcome, is in fact something she sees echoed throughout Dunn-Edwards as well, such as the way Dunn-Edwards established the world's first LEED® gold-certified paint manufacturing facility, or how there are Professional Color Advisors to help with final color selections. It’s why now, as the principal of Marina Edwards Interior Design, Edwards herself is emphasizing the process when it comes to factors such as the origin of a design product. It’s important for her to be aware of where items are sourced and to use local craftsmen.

One such project where she showcased this emphasis was a recent design project in Los Angeles. Edwards approached the Silver Lake-neighborhood home, which she designed for two female TV writers, with the goal to create an ‘Ojai oasis’ for them, but within the sweeping San Gabriel Mountain vistas. For this, she opted for natural materials and Southern California favorites of light, neutral tones—tones that the designer naturally gravitates to. Her favorite Dunn-Edwards color is Cashmere (DEC758), a soft and creamy neutral with pink undertones—a true luxurious classic. “It’s white, white, white, beige and neutral everywhere,” jokes Edwards, “and then, for their writing office, it’s a party.” Here, neutrals give way to a blue mid-century Palm Springs wallpaper and rattan. 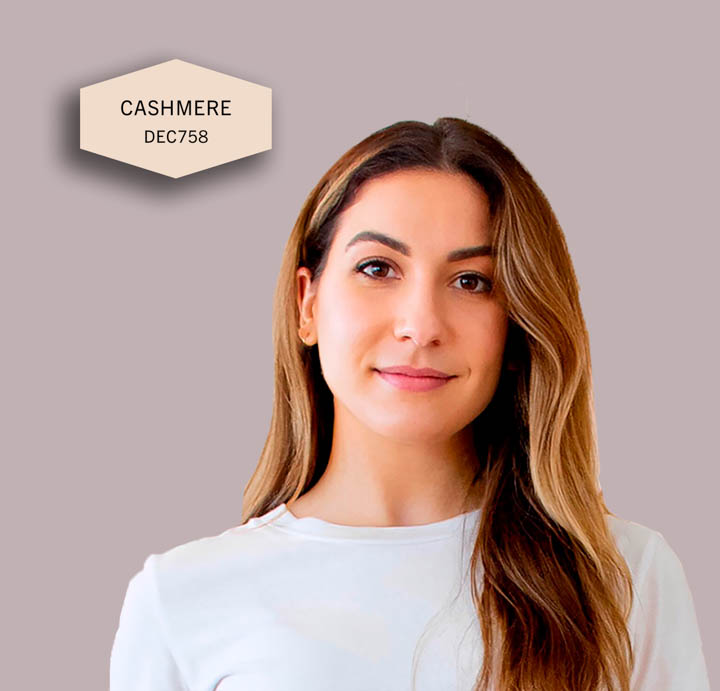 While the pandemic and supply chain issues were an unexpected challenge on the project, it was one Edwards was able to meet head-on. She completed the project as expected by the clients—while still in school abroad. 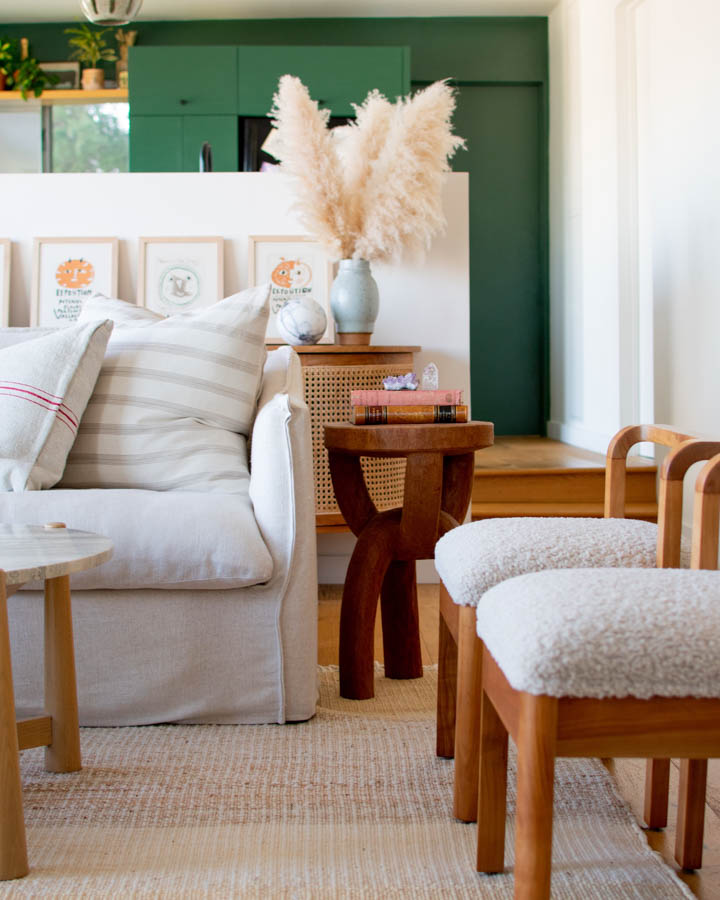 Edwards aims to cultivate a design practice both in Los Angeles and Paris as she looks to the future. Noting an important takeaway from her family’s legacy is that it’s possible to create something that you’re passionate about at a large scale that still makes its employees feel like members of a family. “I don’t have any employees yet, but if and when I get to that point, it will be about uplifting everyone,” says Edwards. That’s part of the process.