History and Color
Just as much as an architectural style, color can embody an era, a movement, transporting us to a different time and place. From the early 20th-century’s association with warm yellow shades of corn and wheat, to the bold and bright aquas, oranges and limes of the Mid-century Modern period, color tells a story of people and culture. Out of this idea, our Then, Now, and Forever® color collection was born. 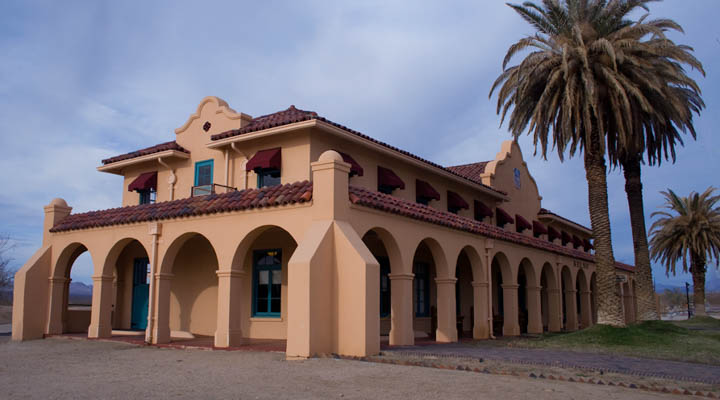 The historically-accurate colors of the collection were inspired by the architecture of the American West and carefully matched to actual samples from historic buildings and sites. To do this, we worked with Architectural Resources Group (ARG), a group of architects, planners and conservators who believe in the value that history adds to modern life, and work specifically in preserving historic structures. The result of this preservation and research is Dunn-Edwards Then, Now & Forever® paint collection of 300 colors, 142 of which are historically accurate and 158 that are trending today. 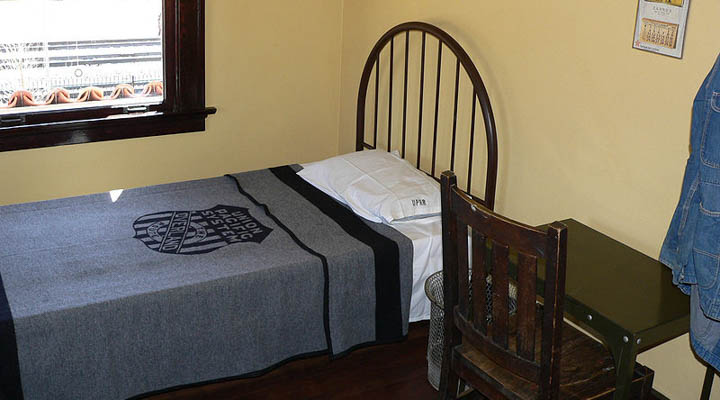 About The Kelso Depot
The middle of California’s Mojave Desert isn’t the first place you’d think to find a historically-significant building. However, that’s exactly where the Kelso Depot, a Spanish Revival railroad depot built in 1923, is located. Originally known as the Kelso Clubhouse, it was built as a train station, restaurant and hotel. Today the historically-designated building serves as the main visitor center of the Mojave National Preserve.

In the early 1900s the Union Pacific railway sought a rail line to connect the port of Los Angeles to Salt Lake City. An incline along the route — in the Mojave Preserve — meant trains required the help of steam locomotives to traverse the relatively steep grade. Kelso’s nearby water source made it an ideal hub to supply the steam powered engines, and thus, the train station was established. The depot housed a restaurant, luggage room, a 24/7 telegraph station, a library and billiard room, along with dormitory facilities for railroad employees and boarding rooms. 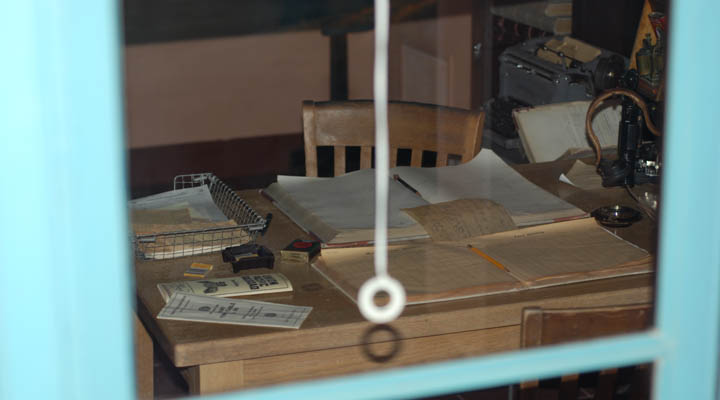 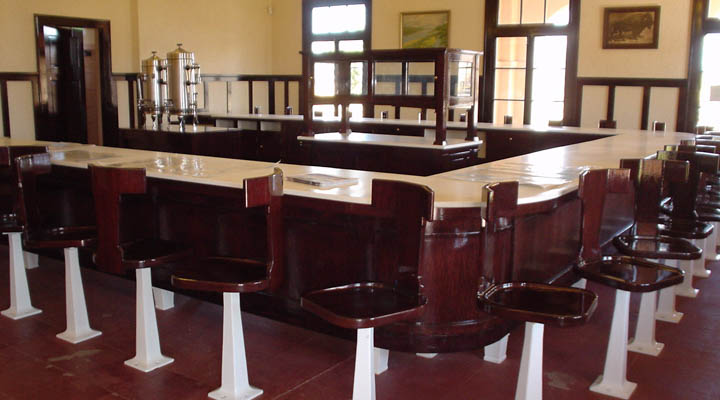 The use of diesel technology in the 1960s led to decreased need for the depot, until eventually operations ceased in 1962. Rail workers left and as the town shrunk, so did the need for the depot. In 1994 the building changed hands, coming under purview of the National Park Service. The building was restored in 2002 and re-opened in 2005, serving as the Mojave National Preserve visitor’s center, once more serving its purpose of welcoming travelers to the region. 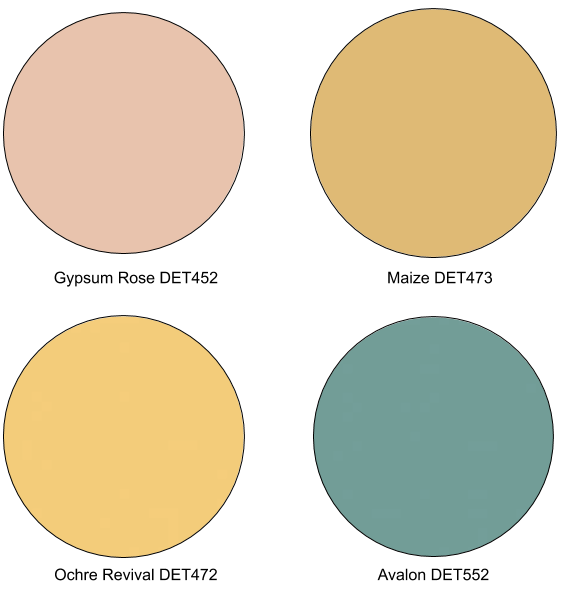 Historic Paint Colors of Kelso Depot
ARG gathered paint samples from the Kelso Depot and then matched to Munsell Color System color chips in order to create reference points for Dunn-Edwards’ color lab before eventually authenticating this dusty rose, deep yellows, and dark seafoam blue-green color to their particular architectural era. This methodical and scientific approach of color-matching at Kelso Depot helped Dunn-Edwards build a truly authentic historic color collection, complete with historically-accurate tones of the Spanish Revival style. As a result of this careful work, four of Dunn-Edwards Then, Now & Forever® paint colors were derived from colors original to Kelso Depot and represent colors authentic to Spanish Revival architecture in the west.

Colors
Gypsum Rose DET452
Also known as desert rose, this peachy hue mimics the crystal clusters of barite that are found in deserts throughout the world. This shade was found on the interior walls of Kelso Depot.

Maize DET473
Also found on the depot’s interior was this dark yellow named in reverence to corn — a crop wholly indigenous to the Americas and a staple of the American diet, particularly for Native Americans and pioneers who moved and farmed in the Western United States.

Ochre Revival DET472
A creamy yellow that complements the warm peach and yellow hues found inside Kelso Depot. The colors in Kelso Depot echo the natural hues of the west and of sunshine, crops and desert sands.

Avalon DET552
A dark seafoam blue-green that contrasts with the warm yellow-desert shades, Avalon was discovered inside the Kelso Depot. Named after the beautiful blue of Avalon Bay off the coast of California’s Santa Catalina Island, this blue is found in Spanish Revival and Arts & Crafts architecture throughout the west.

ARG and Dunn-Edwards have seen an abundance of warm color palettes in historically-significant buildings like the New Mission Theater and Schindler-Grokowsky House and Stockton, California’s Fox Theater. To learn more about how architectural styles in the West have impacted colors in the Then, Now & Forever® collection, reference our guide to International, Mid-century and Ranch architecture. And if you’d like to see a historically-accurate building featuring a cool color palette of blues, take a look at San Francisco’s Bathhouse-turned Maritime Museum.