What’s iconic about Las Vegas? Ask anyone and they are likely to say the Strip with its world-renowned casinos, music venues and the “Welcome to Fabulous Las Vegas, Nevada” sign at the south end of the famous (or infamous depending on who you ask) boulevard. Betty Willis — the artist behind the neon sign that has inspired countless selfies, T-shirts and other tchotchkes — was also the creative genius behind the Blue Angel. 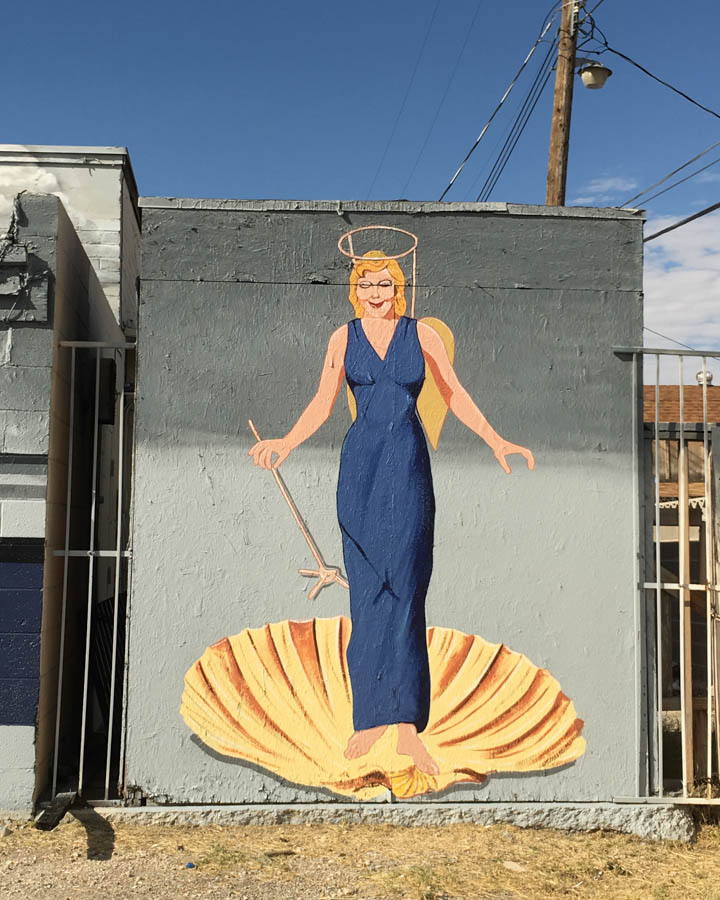 For 61 years, the 16-foot statue had the best vantage point in Sin City, sitting atop the Blue Angel Motel until the property was demolished in 2015. The Blue Angel was saved and is currently under restoration. She made a brief appearance during an art installation at the Neon Museum last year and, now, the Blue Angel can be seen across the street from the museum’s Boneyard on the 705 arts incubator building (705 Las Vegas Blvd. North). Well, more like the Blue Angels. Artist James Stanford recently created his 2000-square-foot “A Phalanx of Angels Ascending” mural as a tribute to the iconic statue. 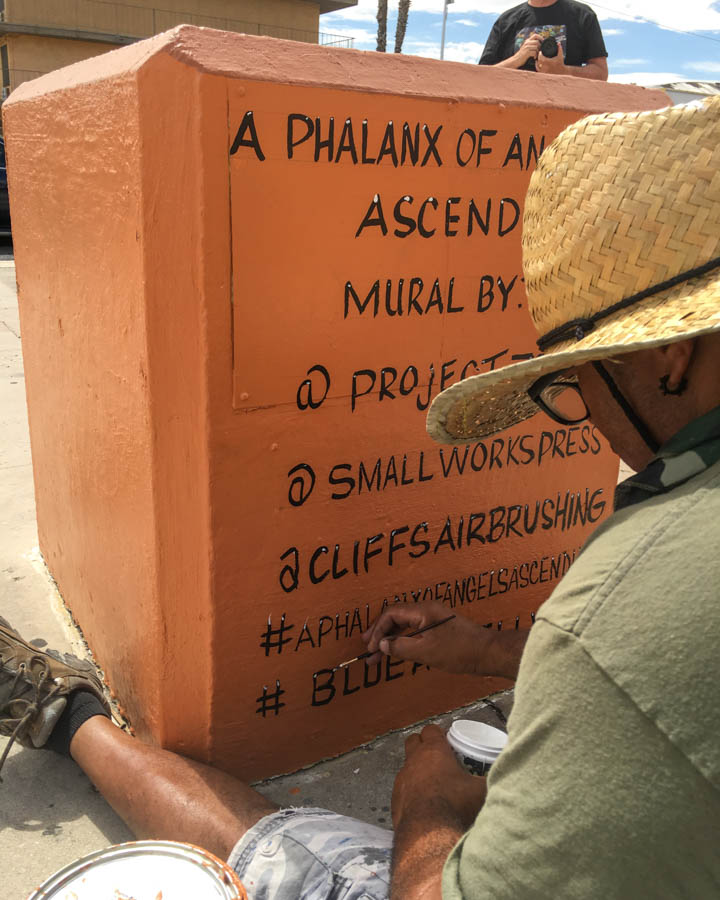 What was the inspiration for the concept and for showing multiple Blue Angels?

I first saw the Blue Angel when I was 10 years old; 1958 was the year that The Blue Angel Motel was built. As a child, I lived only a short distance away from the Blue Angel Motel. Besides the obvious intrinsic beauty of the design work of the great Betty Willis, the history and personal memories surrounding the Blue Angel drew me to her. The Blue Angel stood as a sentinel over my end of town. At 16 feet tall, standing on a 10-foot-tall pedestal on top of the two-story building she dominated the single-story skyline.

As a young artist, I was deeply inspired by the artwork of the Northern Renaissance. I loved their attention to detail — the angels floating on clouds — and the religious subject matter really inspired me. The Blue Angel seemed to belong to a heavenly environment. It seemed natural to depict her ascension into the heavens. 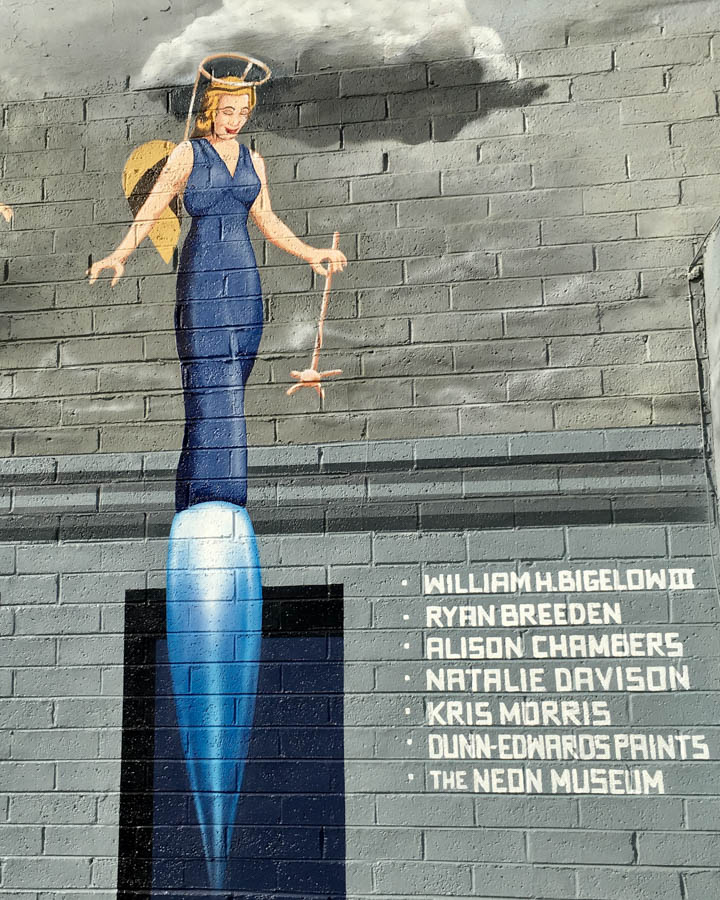 To many, she stood to watch over our daily activities, always smiling, always approving. She seemed so non-judgmental, blessing our mundane activities. If we got out of line, she could sprinkle us with unicorn dust from her magic wand. Depicting her ascending into the heavens seemed to be an appropriate homage to this inspiring icon of Las Vegas.

I want the viewer to be inspired by the angels ascending into the heavens. I want them to feel like they could join in and take flight also. And, what is better than one Blue Angel? Many Blue Angels! From there, “A Phalanx of Angels Ascending” was born.

We also spoke with Laura Henkel, director of Special Projects and curator for ArtCulture PR, who helped organize the project.

Why is the Blue Angel an important piece of Las Vegas history?

The Blue Angel is the unofficial patron saint of Las Vegas. From her Mid-century modern perch in an area called Five Points (the intersections of Charleston Boulevard, Eastern Avenue, Boulder Highway and Fremont Street (which was also known as Route 466, a spur of the famous Route 66) in Downtown Las Vegas, she watched over locals and tourists, alike, for 61 years. In the 1950s, there were about 44,000 people living in Las Vegas with more than 8 million people visiting. 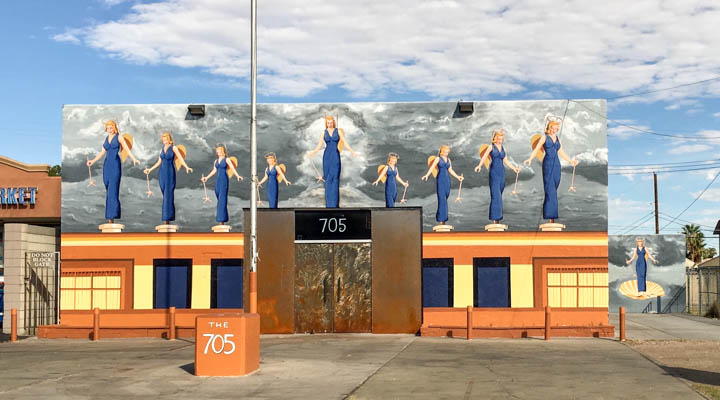 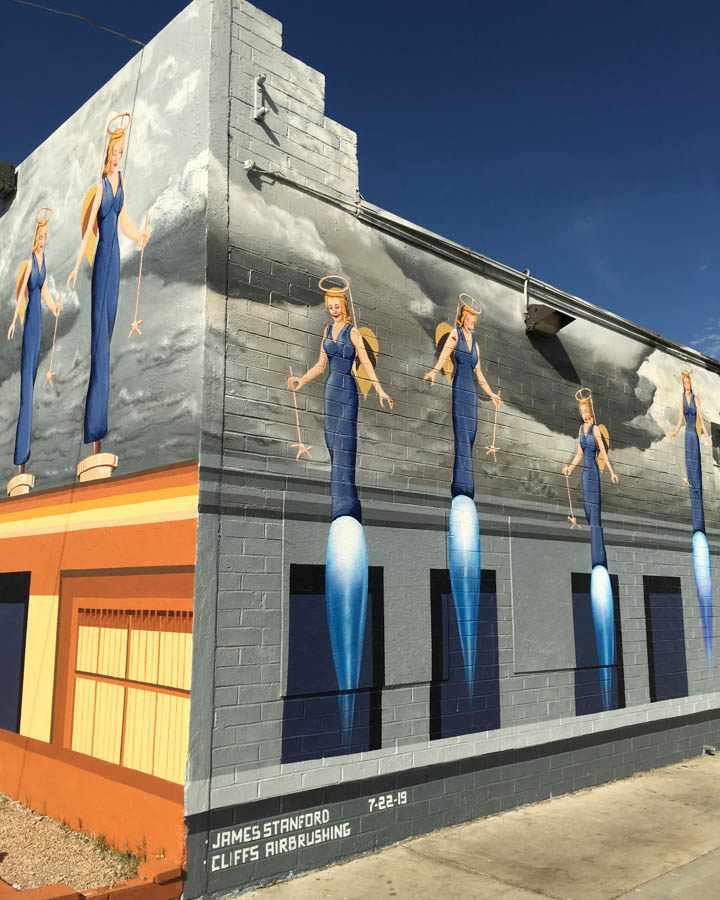 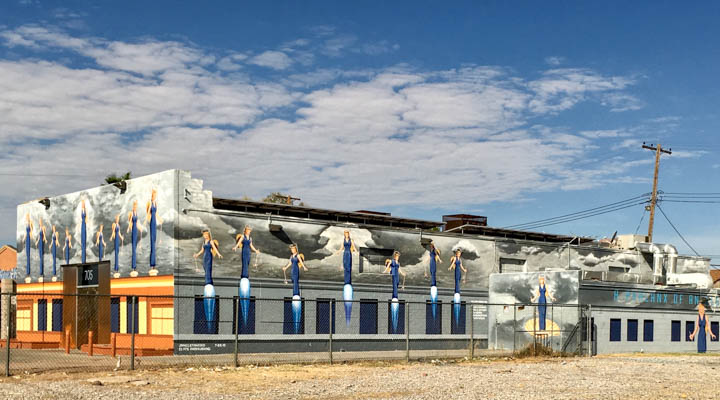 The Blue Angel was created in an era of critical mass in arts and culture in Las Vegas. Southern Nevada attracted the best scientific minds (think Nevada Test Site); the opening of Nellis, the largest AirForce base in the United States; and the incredible Thunderbirds flying high. Of course, it was also a mecca for the most renowned entertainment in the world.

She was inspired by a combination of actress Jean Harlow and the buxom showgirls of Donn Arden's Lido de Paris and Bluebell Girls at the Stardust, Jack Entratter's Copa Girls at the Sands and Dunes, and Harold Minsky's Follies at the Desert Inn for inspiration.

From the time she appeared in Las Vegas and to this day, she is this unwavering muse set among the most spectacular desert skies.

Why was it important to memorialize the Blue Angel in a mural?

The Blue Angel was removed for restoration two years ago and no one is certain when she will return to Five Points. Since she has been gone, there has been something missing in the ethos. People miss her. She represents so much to so many. 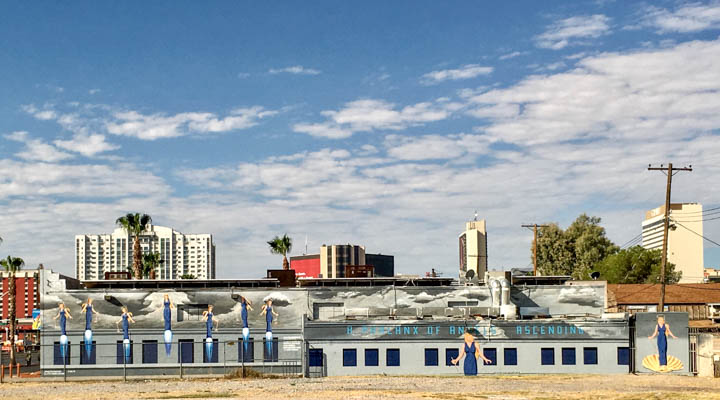 Why was the artist James Stanford the right artist for the mural project?

Stanford is an outstanding multi-media artist who so happens to be a Las Vegas native. As curator, I imagined an installation inspired by his “Shimmering Zen” portfolio. In “Shimmering Zen,” Stanford transforms his photographs of vintage Las Vegas neon signs and marquees into the most colorful and exquisite modern mandalas. I knew Stanford could render something spectacular for the massive project. What he ultimately submitted blew my mind. His homage to the Blue Angel was fantastic!

Alison Chambers, the property owner who designated the building as an arts incubator was over-the-moon elated with the concept. Rob McCoy, executive director of The Neon Museum, was so incredibly helpful in having the mural in such close proximity to Neon Museum’s Boneyard. Cliff “Airbrushing” Morris executed Stanford’s vision perfectly. In many ways, it was the perfect trifecta of artists, property owner and cultural institution.

Why did you want to partner with Dunn-Edwards?

I was familiar with Dunn-Edwards’ philanthropic mission to support dynamic arts and culture projects across the country. Plus, the quality of its paints may withstand the high desert’s extreme environment, so that the vibrancy of artistic expression is upheld. “A Phalanx of Angels Ascending” by Stanford is going to be up for many years. It truly has been an ideal partnership in so many ways and a project to be incredibly proud of. 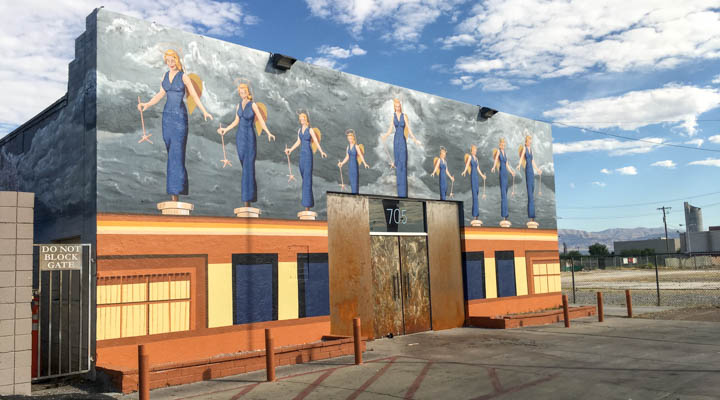 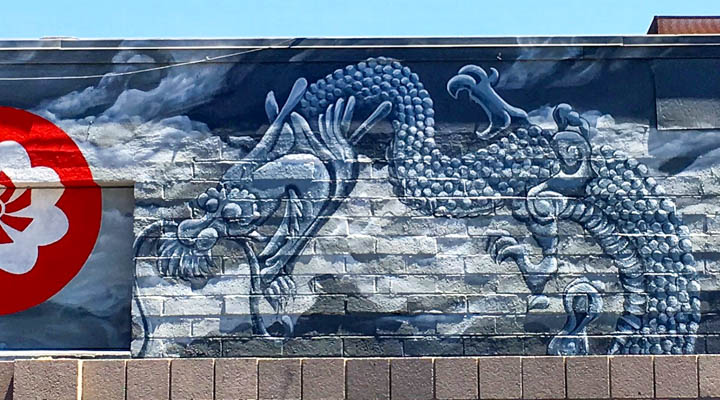 What has the response been to the mural so far?

The response has been amazing. People stop by the mural and have their picture taken with it. An Instagram account has been created to share the pictures people take. Pics may be seen at @aphalanxofangels. There has been an outstanding amount of international press surrounding the mural. When you curate a project like this and it resonates positively with so many people, it makes all the hard work to put it together worth it. To see the positive impact of Stanford’s installation warms the heart.

What do you hope the mural ultimately accomplishes for the city, the Las Vegas arts community, etc.?

The mural celebrates Las Vegas’ fabulous past by reminding the world that the city has a rich history, while celebrating its current artistic renaissance.

All images with courtesy and permission of Laura Henkel