Multi-media artist James Stanford is no stranger to creating art that merges past and present, reality and fantasy. In fact, Stanford is best known for his artistic work exploring themes of religion and spirituality, Zen Buddhism, and the metaphysical like his famed photomontage series, "Indra’s Jewels." Now he’s brought this talent to another project, one that features prominently in Las Vegas’ ever-transforming landscape — a new large scale mural entitled, “From The Land Beyond Beyond.” 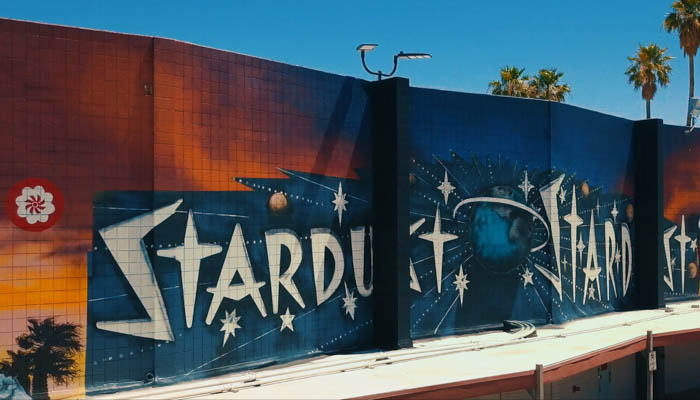 What is The Symbolism Behind From The Land Beyond Beyond?
In June the Las Vegas-based artist finished his latest piece, the 154-by-19-foot mural painting on the Neon Museum’s newly acquired Reed Whipple building, which is located directly across from the museum. Stanford was commissioned by the Cultural Corridor Coalition to help beautify downtown Las Vegas. In his effort to do so, the artist drew from worldly and fantastical themes, as well as paid homage to the city’s famous Stardust Resort & Casino and Dunes Hotel & Casino, memorializing Vegas’ famed early days. The mural’s title, “From The Land Beyond Beyond,” was inspired by the 1958 film “The Seventh Voyage of Sinbad.” 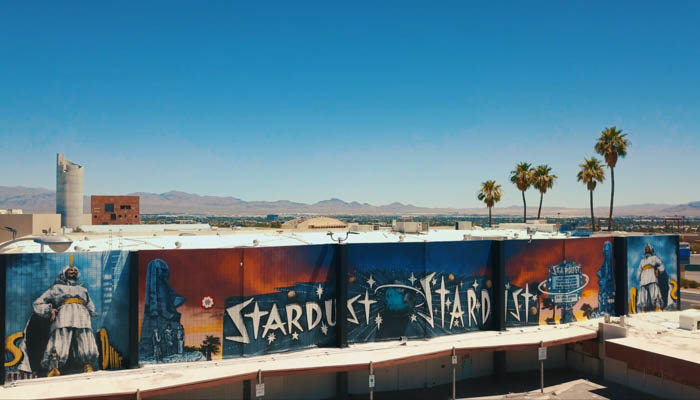 Blending hallmarks of these casino properties, Stanford depicts the astronomical-themed Stardust neon signage and Moai carved lava statues, a reference to the Stardust’s Tiki bar and restaurant. On an adjoining wall panel, the artist painted a giant sultan overlooking the landscape, a reference to the Dunes property. Stanford used Dunn-Edwards Paints to bring his creations to life, and completed the project with the help of fellow artists Nanda Sharifpour, Ali Fathollahi and Milo Duffin. In his mural, Stanford seamlessly merges the city’s past into its artistic and cultural future with these images, displaying a heritage of art, design and commerce unique to Las Vegas. 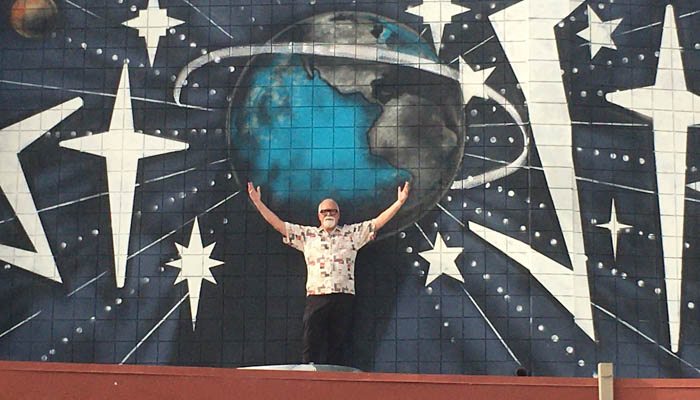 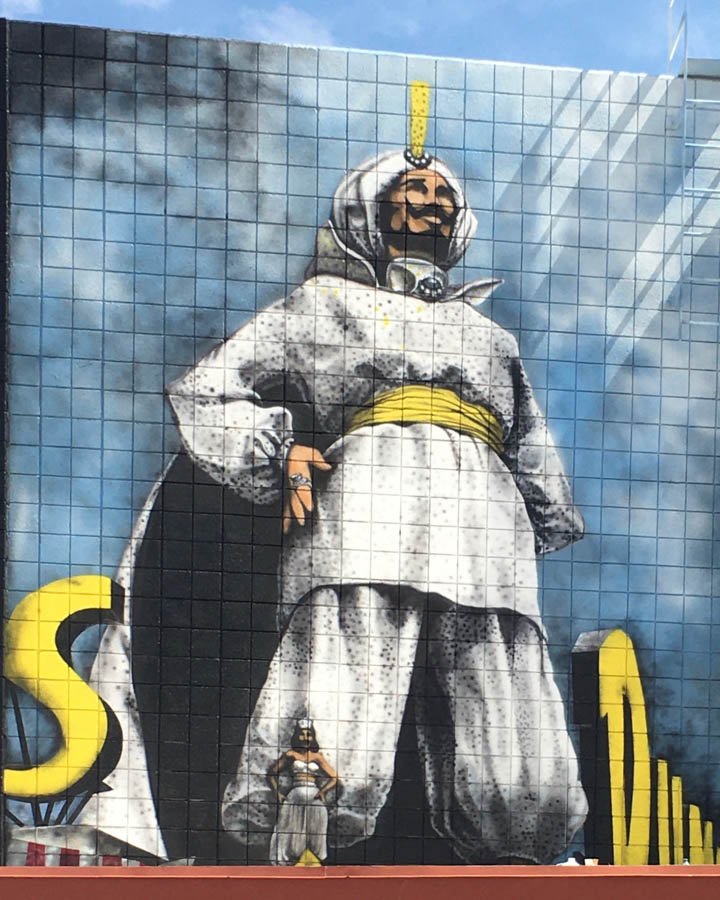 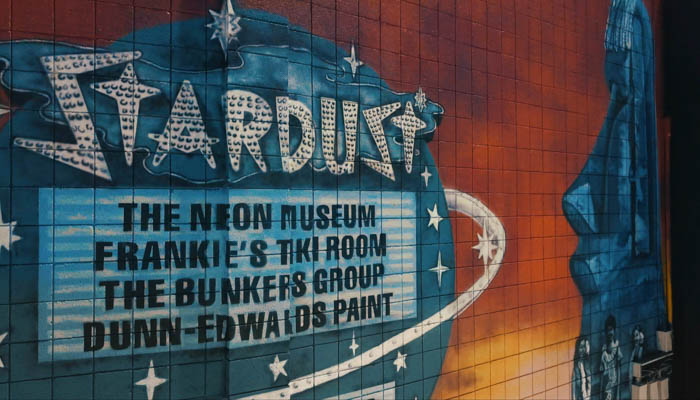 How Was The Mural’s Imagery Conceived?
Finding the right images for his vision was not easy though, according to Stanford. He turned to the Las Vegas News bureau for help, sifting through their photo archive, finally choosing exact imagery he wanted to use for the mural. “One image which is really fascinating is the image of the woman standing on the foot of the Dunes sultan. I’d never seen that before in my life,” stated Stanford in his short film about the commission.

The artist feels his design blends well with the Mid-century Modern architecture of the Reed Whipple building (which dates to the 1960s), the addition of which will expand the Neon Museum’s presence in Las Vegas by 32,000-square-feet. “I was amazed at how easily and how beautifully the mural fit into the architecture of the Reed Whipple building and really enhanced and celebrated these amazing icons of Las Vegas’ Golden Age,” explains Stanford in the film. 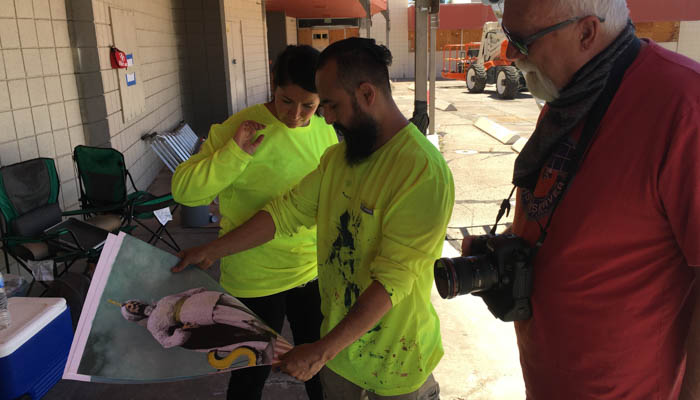 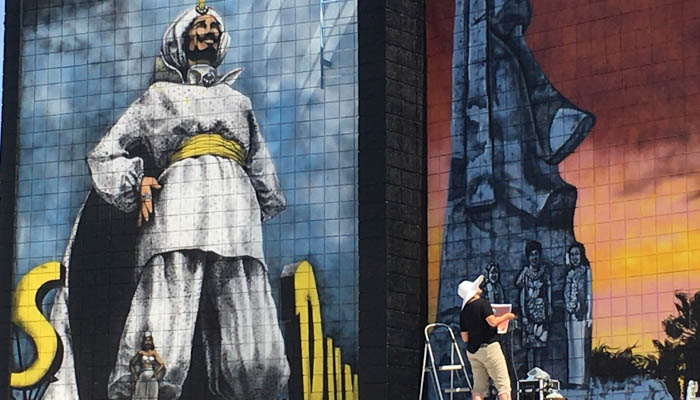 How Does From The Land Beyond Beyond Connect To James Stanford’s Other Work?
“From The Land Beyond Beyond” complements his other fantastical work that sits just a block away — “A Phalanx of Angels Ascending” — that welcomes visitors and locals alike into the Downtown Las Vegas cultural area. His “Angels” piece depicts the Blue Angel in repeat, an icon that perched atop the Mid-century motel of the same name for 61 years. 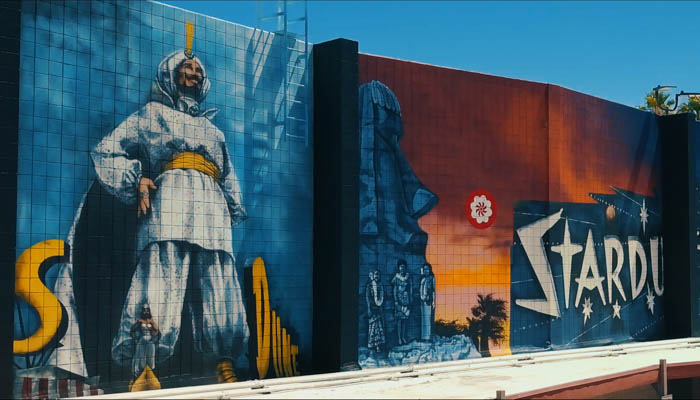 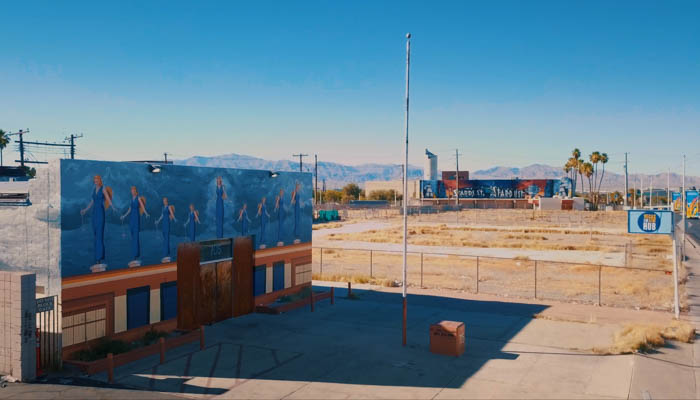 All photos courtesy of Smallworks Press.