Every high school has its rebels — those who color outside the lines and push the envelope just a bit further. It’s in these kids that Los Angeles-based artist Maura McLaughlin sees great untapped potential. In fact, when McLaughlin learned her daughter’s friends were expelled from their Los Angeles Catholic school due to their graffiti activity in the streets and around campus, she immediately created a community event — a graffiti art competition for these kids — as a way to rechannel their creativity. “Intuitively, because I am a creative director in graphic design, I knew that they needed an outlet,” McLaughlin stated. The event was the catalyst for what would eventually become McLaughlin’s non-profit, Off The Wall Graffiti. 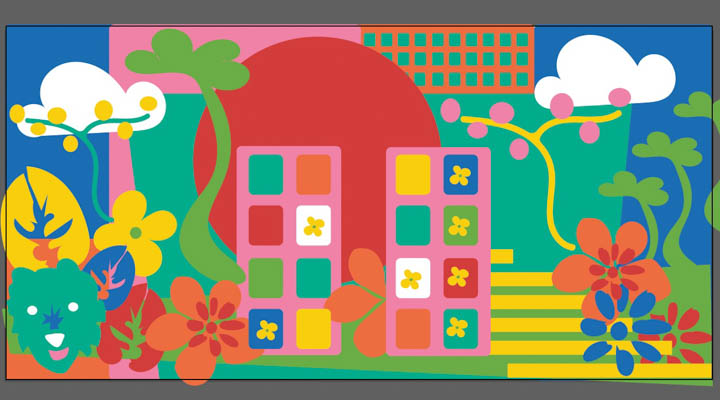 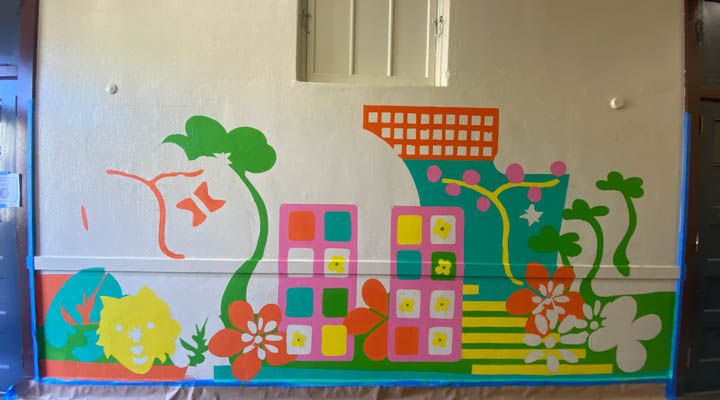 Graffiti As An Art Form
Today, Off The Wall Graffiti provides art education to urban artists. Through after school programs, events, and in-school curriculum, it seeks to build a coalition of educated, global, and unified artists poised to change the world through their creativity. The in-school curriculum is where McLaughlin and her crew have shifted the majority of their efforts recently, teaching both art history and providing opportunities for large-scale, school-sponsored graffiti art.

By working with continuing education high schools throughout Los Angeles, Off The Wall Graffiti reaches children on a consistent basis, broadening their understanding of art and their practical application of it, in a profound way. McLaughlin explained, “the novelty and the subject matter — seeing their single line drawing transform into a digital image, then seeing it added to a mural design — is transformational on many levels. It legitimizes their creativity and justifies coming to class.” Work with two schools recently — Metropolitan High School in downtown Los Angeles and Stony Point High School in Chatsworth — showcase the non-profit’s work. 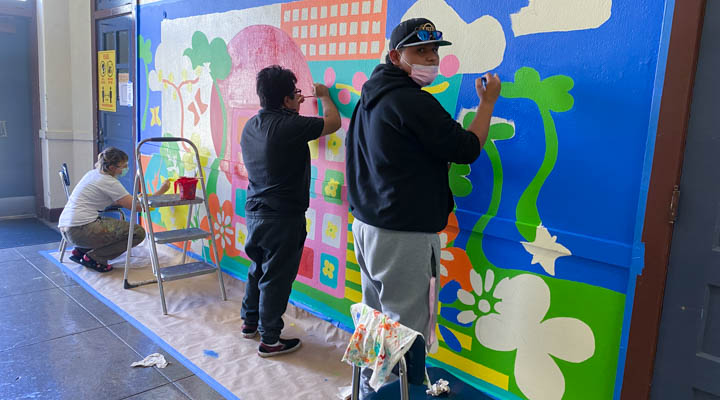 McLaughlin feels that art is essential to giving continuation high schools character and giving their student bodies a sense of pride. “As most continuation high schools go, they are created out of left-over spaces. Almost to a fault they are institutional in appearance and in resources," she stated. When it came to Metropolitan High School, she noted there was a particular kind of irony about its general appearance before Off The Wall Graffiti got involved. Located in the heart of L.A.’s Arts District, renowned for its blocks of public murals, the Metropolitan itself had no external personality. That all changed, however, once the non-profit was invited to teach art classes. 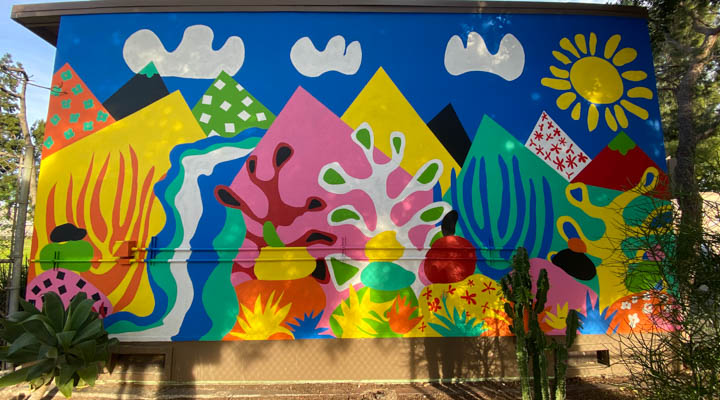 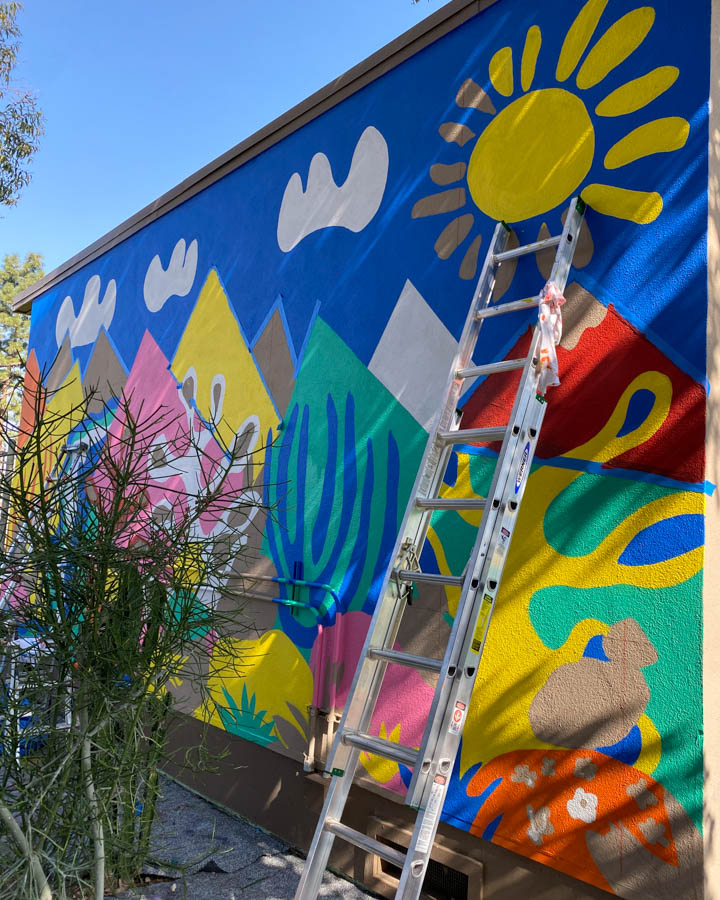 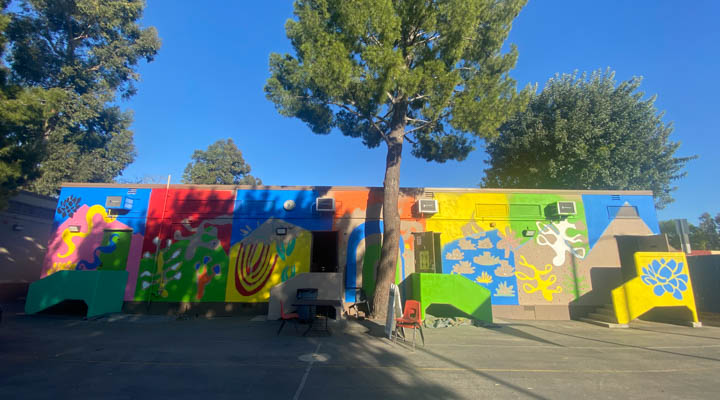 Art History With A Modern Twist
Just as Off The Wall Graffiti was about to enter the classroom, COVID hit. Like everyone else, the organization pivoted, reconstructing its curriculum into one that could be taught online. The non-profit leveraged technology to create 30 instructional videos, a student-focused podcast series, and also opened a Slack room to keep students creating “together” while staying physically apart.

The curriculum pulled students through Matisse, often asking them to utilize the French artist known for his use of color, as inspiration in their own creations. “We teach through art history, through the lens of Matisse. The main reason we use him is because there are ample examples of his work and they are very paintable. We do work that we know everyone will be able to access from a basic skill level. Matisse was not a basic painter but later in life he worked with cut paper, and that is the work we mimic into paint,” stated McLaughlin.

The students’ artwork, with the help of the non-profit, is the basis for a mural that enlivens Metropolitan’s halls. It was important to the kids to create a design for Metropolitan’s mural that incorporates familiar sights like the campus dog, the downtown city skyline, and palm trees. 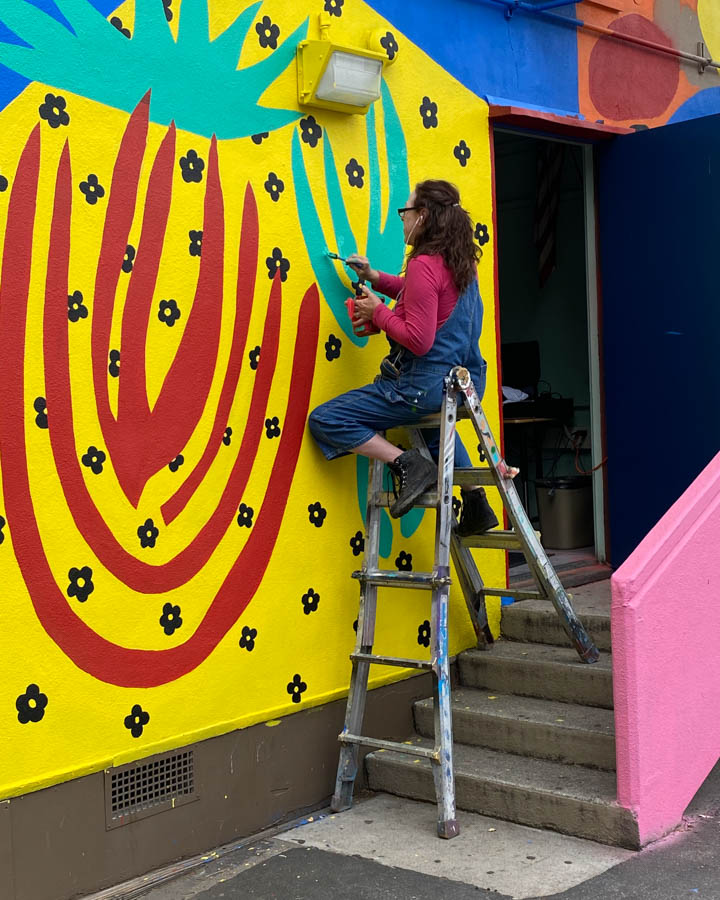 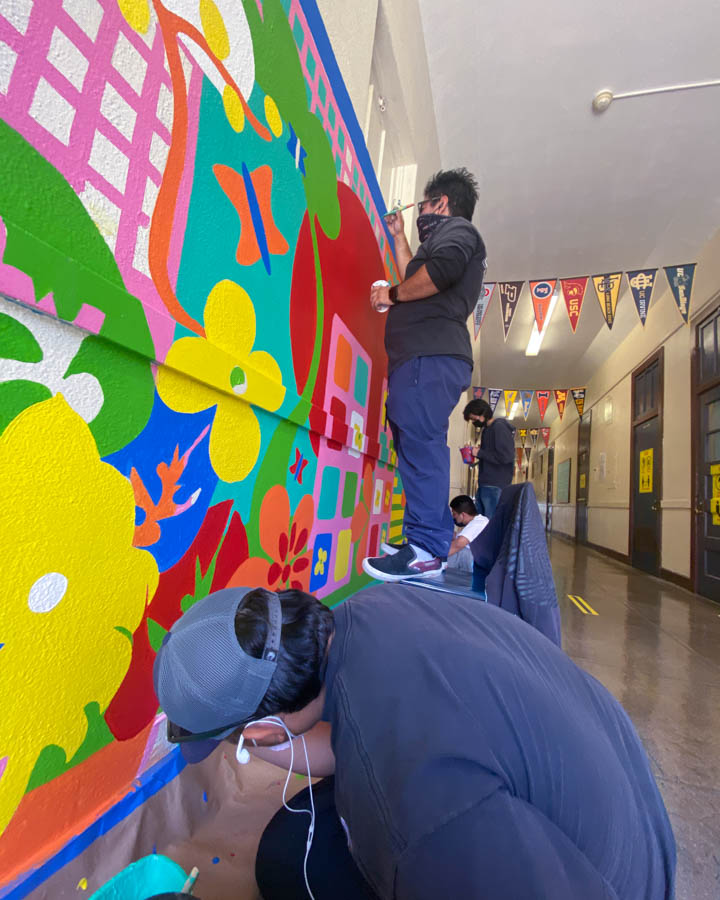 In the spring of 2021 McLaughlin and a skeleton crew were invited back to Metropolitan’s campus to start work on painting the mural using Dunn-Edwards paints. “We had abandoned the notion that students would help paint during COVID,” explained McLaughlin. So she was pleasantly surprised when students showed up to help. She noted that she had a student who, “was so excited to see his work as a part of the mural, he asked if he could paint.” 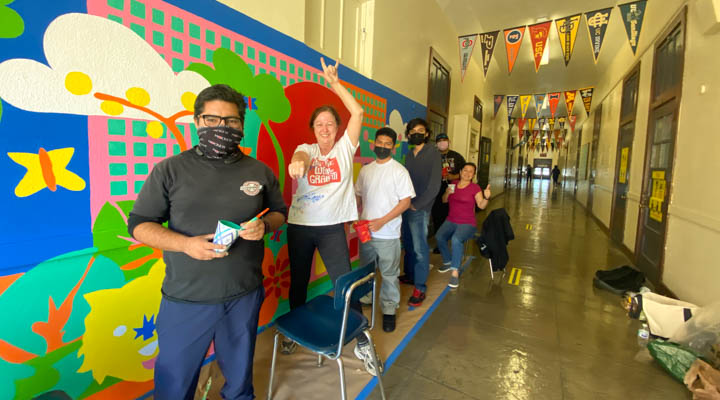 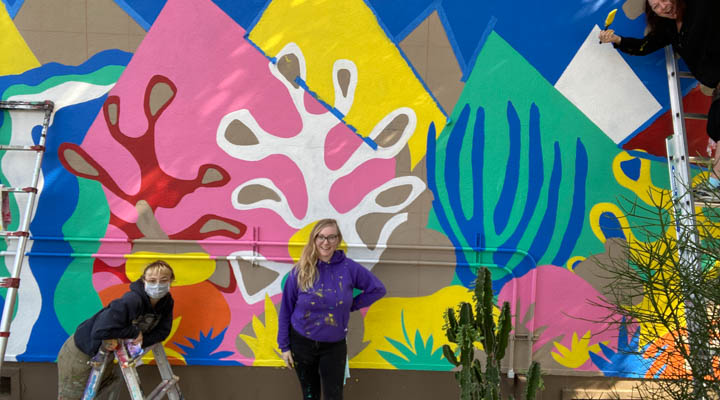 A School Rebrand
Off the Wall Graffiti brought their art curriculum to students at Chatsworth's Stony Point High School, which ultimately coalesced into an entire rebrand of the school. From the school’s exterior, to school merchandise, logos, and stickers, the non-profit and its sister design agency, Orange34, weaved Dunn-Edwards paint colors throughout virtually every aspect of the high school.

Starting with the school’s exterior, once a beige box, they painted one of the walls in a Matisse-inspired mural before tackling a larger, 15-feet high by 75-feet long wall in a similar theme. The first wall, McLaughlin noted, “we painted in four days with the team from Orange 34 who had designed the mural, as well as the principal’s daughter who has a degree in art history. We couldn’t have any students on campus so it was our own pod.”

The monster task of the second wall, however, fell to just a two-person team as a result of COVID. “This wall became a mission,” she explained. It took four months to paint with the duo painting multiple coats to ensure the saturated colors looked just right. 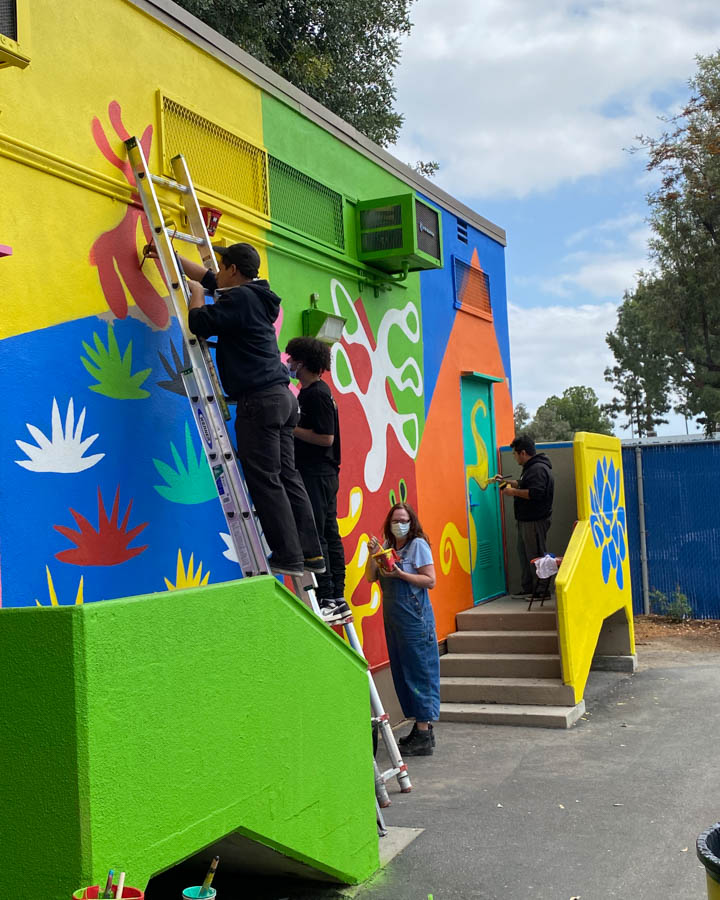 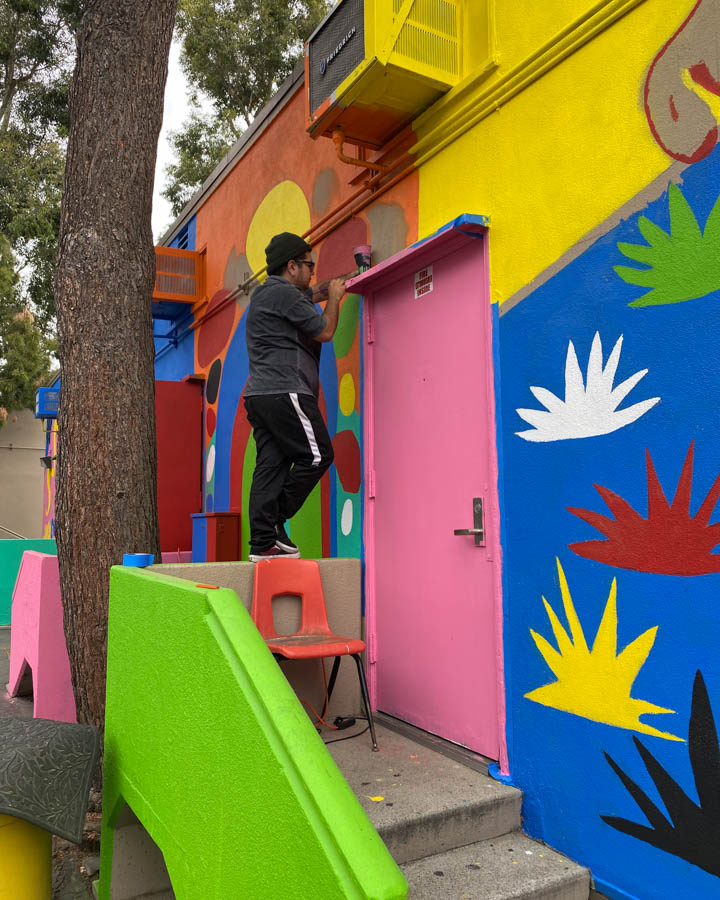 Like with Metropolitan’s mural, Off The Wall Graffiti felt it was crucial to incorporate objects in the painting familiar to the Stony Point student body — the tunnel at Chatsworth park and elements of the surrounding landscape like stacked boulders, a waterfall, succulents and mountains.

Painting A Sense of Delight
“Prior to the re-brand there was a constant, overbearing notion of failure on campus and now it’s a completely different vibe,'' explained McLaughlin. Now there is a sense of delight and inclusion which fly in the face of the stigmas often attached to a continuation high schools. “We cannot overstate how Dunn-Edwards is in all of these murals. You have given us so much to work with,” she stated. 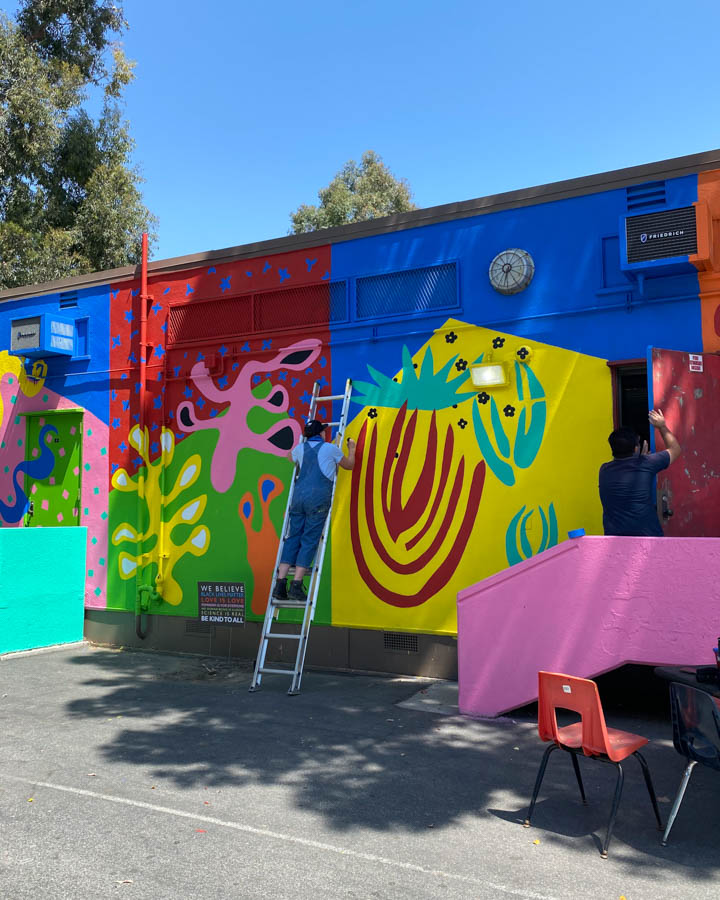 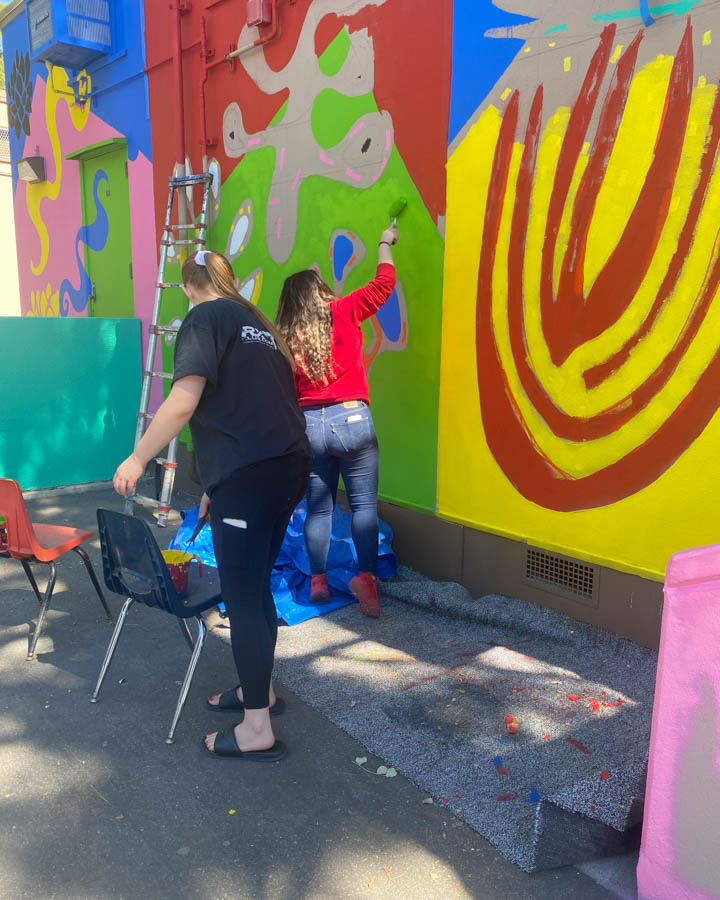 This isn’t the first time Dunn-Edwards has been involved with community efforts of beautification. Take a look at how artists transformed blighted buildings in Oakland, Calif. with a dose of color from Dunn-Edwards Paints.