Miranda Hayes washes a colander of fresh berries, their ripe reds and vibrant blues contrasting the soft gray paint tones of her kitchen. She pours the berries into a bowl as a snack for her son who has just returned home from his last day of middle school and pulls up a stool at the kitchen counter. Hayes breathes a sigh of relief — for the conclusion of the school year, yes — but perhaps an even larger one for wrapping the six-year process of building her family’s new dream home in Pasadena, Calif. 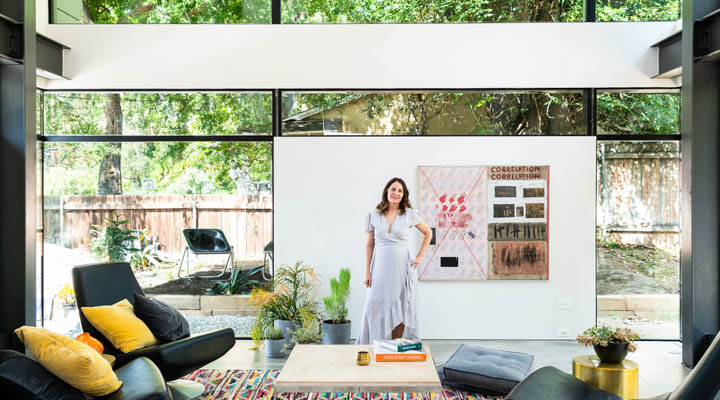 For Hayes, it was a journey of discovering the craftsperson within herself, as well as the community of dedicated craftspeople, artists and designers around her who would help her construct the house. Her community is similar to the one at Curator, an Irish paint brand that is the gatherer and custodian of the colors inspired by Ireland’s native design community. With the help of unique people — and products like Curator — Hayes brought her vision to life. 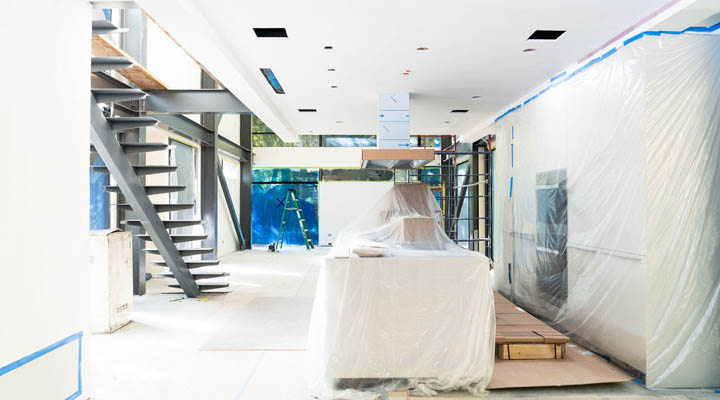 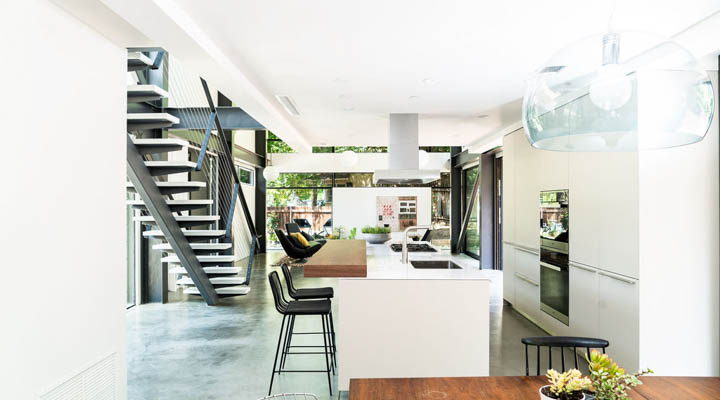 An Unexpected Journey to Construction

Hayes laughs when reminiscing about the complexity of it all. “The county didn’t know what to do with us,” she said. The home’s unique steel framing and extensive walls of glass put it in a veritable class of its own as far as residential structures were concerned. “They ended up classifying us as a commercial building.” When it
comes to discussing her home’s unique build and the daunting task of dealing with the county through it all, Hayes knows best. She was, after all, the general contractor on the project — a position to which she accidentally ascended. 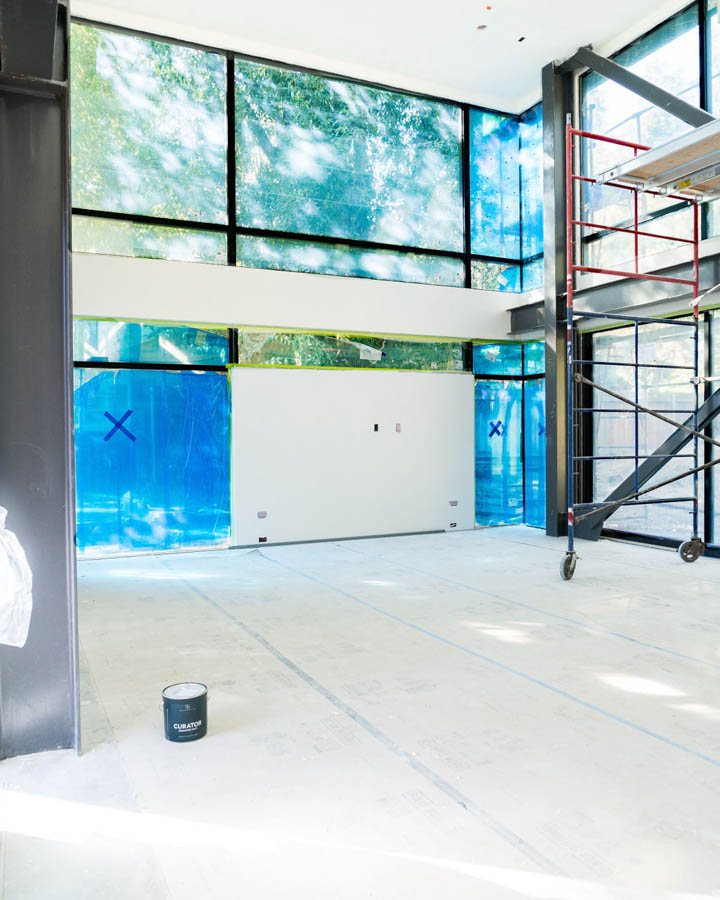 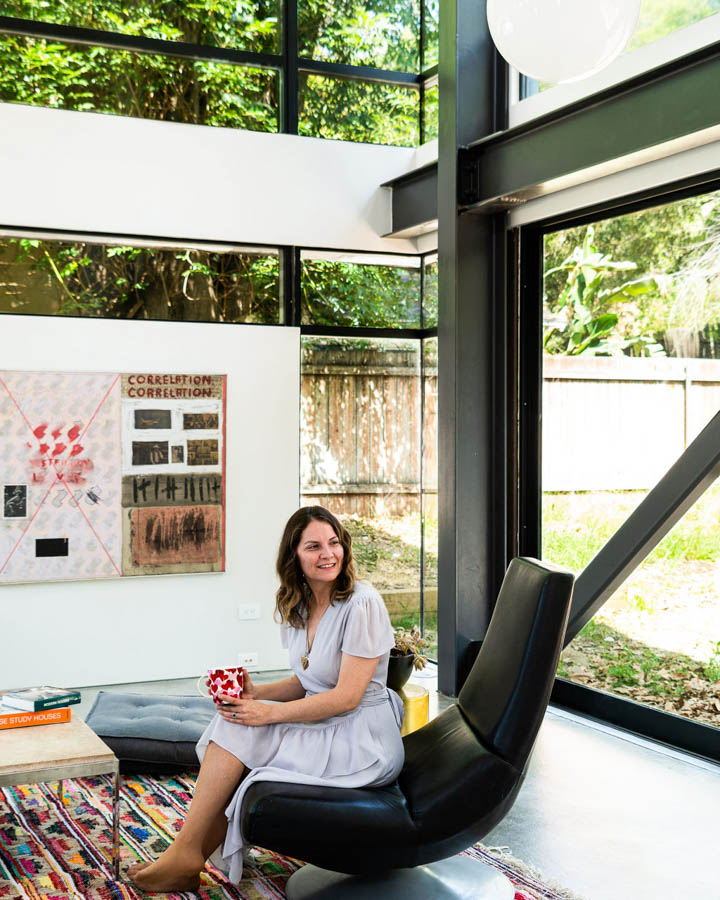 With a 3,500-square-foot, steel-frame main house consisting of soaring ceilings, a fully open concept, and pocket sliding walls of glass (as well as a one-bedroom, one-bathroom guest house), the build was going to be anything but straightforward. “I knew what I wanted, and the uniqueness of the build presented a challenge,” Hayes said. “I was afraid if I didn’t have control of the build, I would have to make too many compromises.” As a result, Hayes took the project as an opportunity to challenge herself. She earned her general contractor’s license and, although she had no prior building experience, she used the logistic and planning skills she learned as a former education coordinator to help her power ahead when hiring subcontractors, managing, scheduling, and dealing with the county and permitting processes. 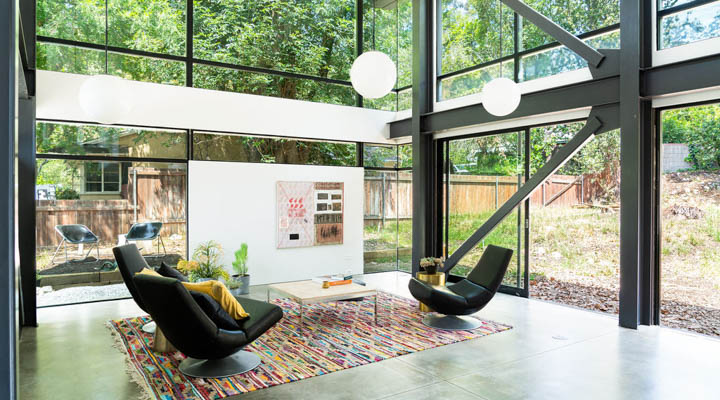 Before Hayes ever donned any hardhats, she and her husband Jason originally thought to remodel their old California ranch house. It soon became clear to them, however, that the home's original bones would not be a good fit for what the family ultimately wanted to accomplish — or with their modern aesthetic. “We were not interested in a particular square footage, but we did want functionality and lots of glass. Sort of quality over quantity,” Hayes said. The new home features a living area that is one large room centered around a kitchen all of which is surrounded, nearly entirely, by glass. “The simplicity of the design was everything we were looking for,” she adds. Ultimately for Hayes, the goal of the home was to create low maintenance indoor-outdoor living that her children, family and friends could all enjoy. 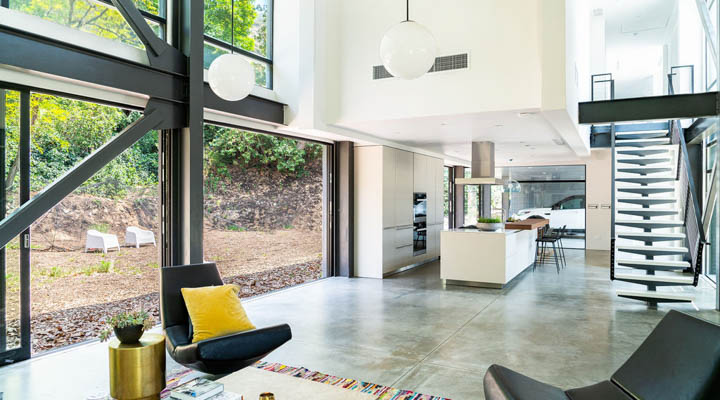 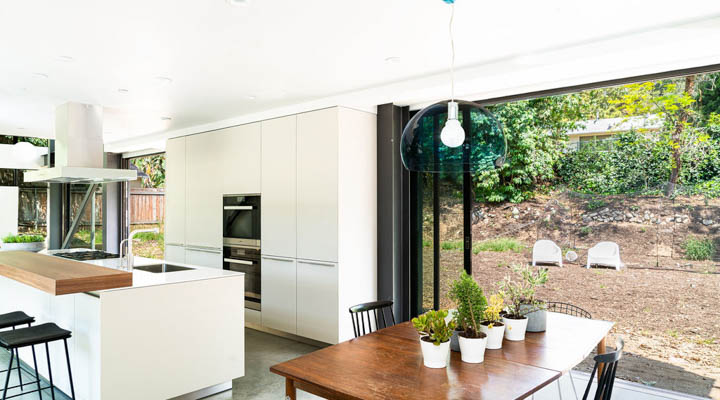 At the outset of construction, Hayes found her days on the job site a struggle: Subcontractors would show up on location and defer to the first male they saw or question Hayes’ authority, outright. Despite initial setbacks of the traditionally male-dominated world, Hayes assembled her dream construction team. “I was able to find the most amazing team of intelligent subcontractors, who respected me as much as I respected them.”

Once the project was underway, Hayes turned her attention to finishing touches. She visited her local Dunn-Edwards store and happened upon its Curator display. This specialty line of 144 paint colors inspired by the hues of Ireland and its native design community caught Hayes’ eye. In particular, she fell in love with the brand’s Enhanced Matt finish. “I was constantly being told by many other paint stores and brands that I shouldn’t use matte, especially with kids, because it doesn’t wipe clean well.” 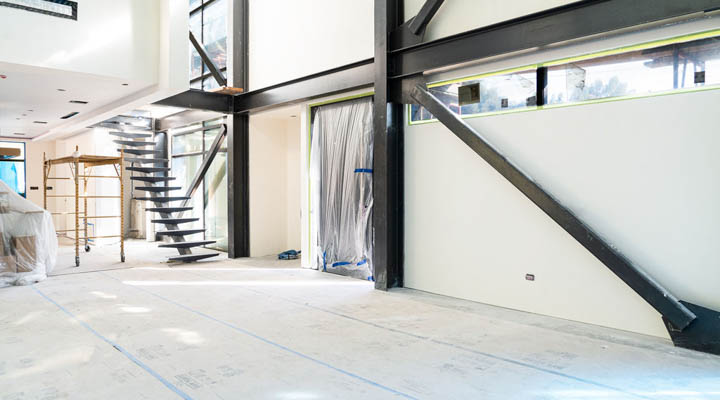 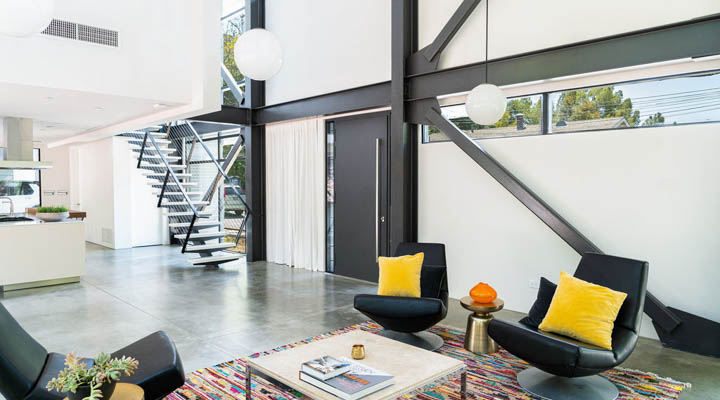 The reality is that Curator’s Enhanced Matt provides a luxurious, soft-touch interior finish that not only looks beautiful but is exceptionally hard-wearing, wipeable and resistant to many household stains. It is a low-odor, low VOC-acrylic emulsion with a depth of color designed to last. As a result, Hayes found that — rather than discouraging the use of Enhanced Matt — the teams from Curator and Dunn-Edwards supported the use of Curator’s Enhanced Matt in her space. “To me paint is the most important part to finalize a space...it defines it. It creates the atmosphere and will transform your mood.” That is why, for Hayes, Curator’s color “Statement” is, well… the perfect declaration of her home. 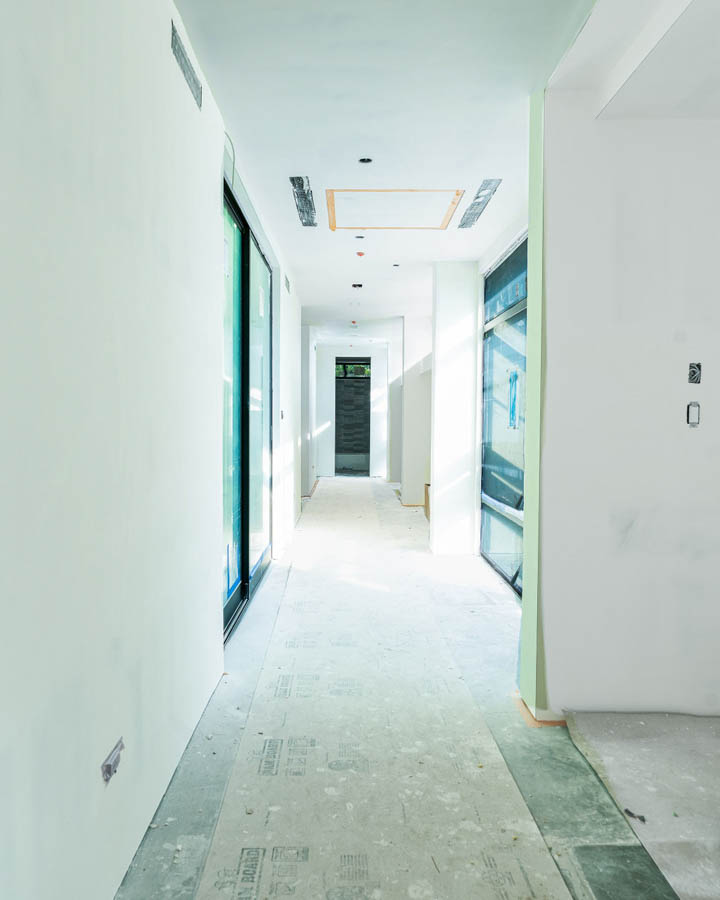 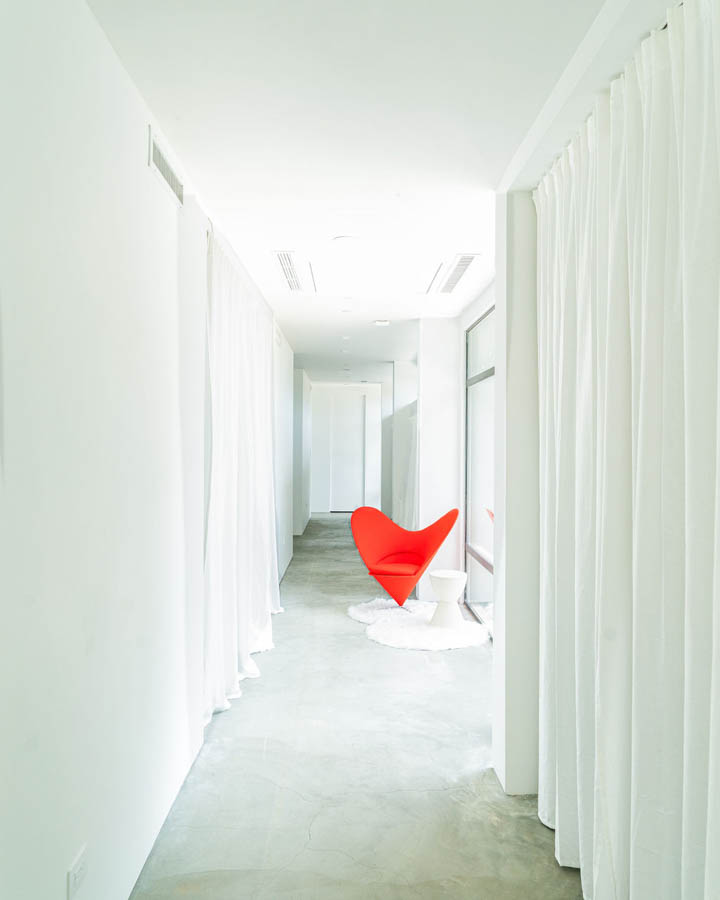 The pale, blushed-gray hue gave her the desired look of having her main living area a shade lighter than the kitchen cabinets, which was also important for cultivating a calm, warm environment that Hayes felt a traditional white wouldn’t do. In the home’s long, dramatic second story, Hayes’ goal was to create the feeling of a hotel or gallery space — a blank canvas from which to display art. Seamlessly blending the living room’s “Statement” with a white for the second story was tricky because the vaulted ceilings flow into one another. 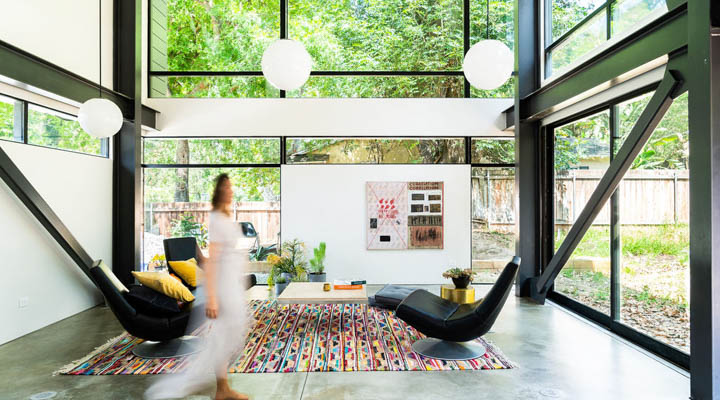 Thanks to the lightest color on the same color palette as “Statement” same color palette, Hayes was able to accomplish a seamless transition. Now, when Hayes sits in her family’s dramatic light-filled living room, she knows she made the right decision to become her own contractor. As for her future in the construction industry? Hayes sees herself as on-site project manager tackling projects of a less personal nature. “I feel like there’s need for more women in construction,” she said.

More on the Dunn-Edwards Partnership with Curator

In 2019, Dunn-Edwards announced the addition of Curator, an Irish designer paint collection produced by General Paints Group, to its suite of products. Inspired by the creative works of 29 Irish artists and designers, Curator’s 144-color collection is a blend of ultra-premium quality paint and colors infused with native Irish art and design.

“Curator is a strong complement to the Dunn-Edwards brand,” said Tim Bosveld, vice-president of marketing for Dunn-Edwards. “The demand for unique, artisan products and colors inspired by European history and legacy continues to grow in the marketplace. With Curator, we now have a line with an authentic connection to Irish heritage and design that will appeal directly to this customer. We look forward to a successful partnership with the Curator team.” Curator is currently located in 10 Dunn-Edwards stores located in California and Arizona.