Skip to Main Content
Even if you’ve never been to LA, chances are you recognise the Los Angeles City Hall. That’s because it’s been featured in movies and TV shows since the 1950s, perhaps most well known as the location of The Daily Planet in the Adventures of Superman 1950s television show. It also featured in the Dragnet series, Perry Mason and the 1953 film version of War of the Worlds. 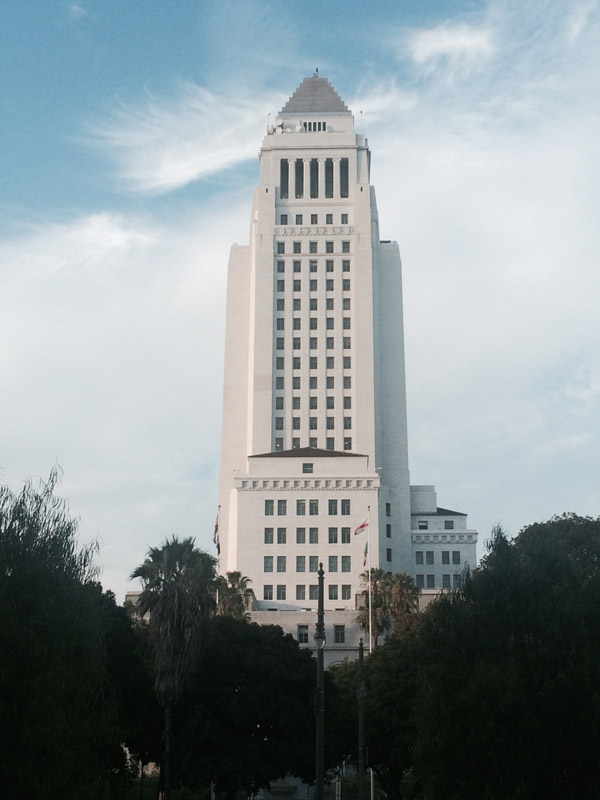 The building, with its distinctive pyramid-shaped roof, is an iconic part of the Los Angeles skyline. The building was designed by three of Los Angeles’ leading architects, John Parkinson, Albert C. Martin, and John C. Austin, who won the commission in 1925. At the time the LA population had just topped one million, the Hollywood Bowl had recently opened and the film industry was expanding exponentially.
Martin was responsible for the structural design, Parkinson, the architectural concept and Austin, the working drawing of the project who stated the style of the building was “Modern American”. The building was completed and dedicated (with a large audience present) on April 28, 1928, and its relationship with Hollywood began from day one, when MGM lent its lighting equipment for the opening events of the City Hall. And an event it was; the three-day celebrations included 30,000 marchers, a performance by Irving Berlin and over 250,000 people in the audience. 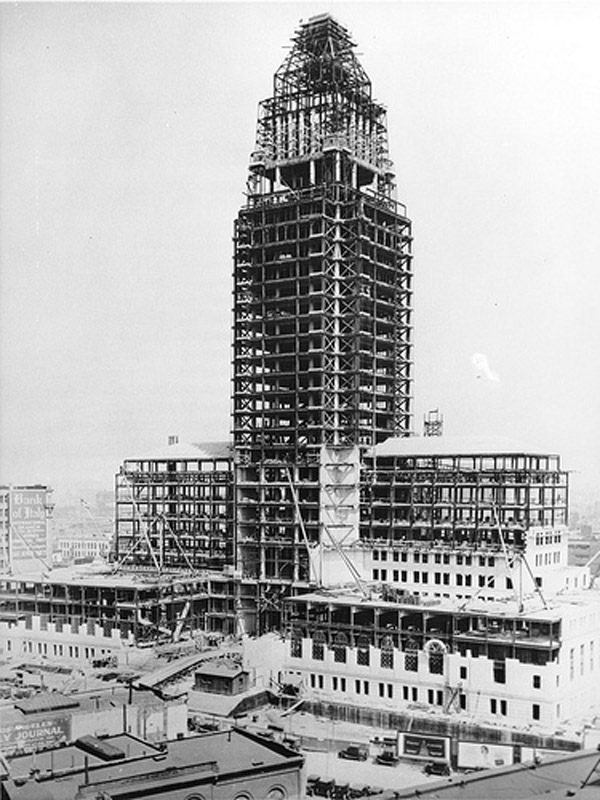 The City Council had used many other buildings since the 1850s throughout the downtown area prior to its current location on Spring Street. The distinctive tower shape was designed to resemble Turkey’s Mausoleum at Halicarnassus, one of the seven wonders of the ancient world. The concrete that the tower is made up of was formed from sand taken from California’s 58 counties, and the water from each of its 21 missions. The building stood tall against the Los Angeles skyline, and so it was ruled that no building in the city was to exceed the height of City Hall, so from 1928 until 1964 it remained the tallest building in the city. Interestingly, an image of City Hall has been on Los Angeles Police Department badges since 1940 and remains today.
Many historians report that the building is in Art Deco style, but its design was intended to incorporate elements of various styles and periods to create a one-of-a-kind structure. While the tower itself is in the Art Deco style, on the Spring Street entrance one can see a classical influence with Grecian details, granite steps, Romanesque style columns and archways and bronze doors with hand-carved reliefs by Henry Lion. 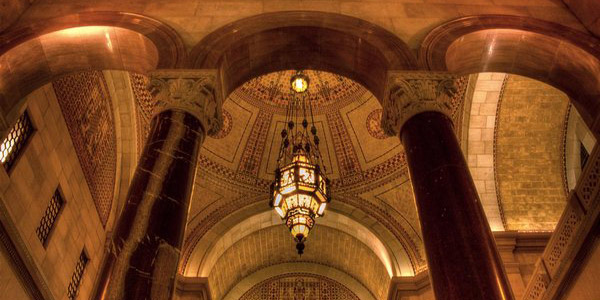 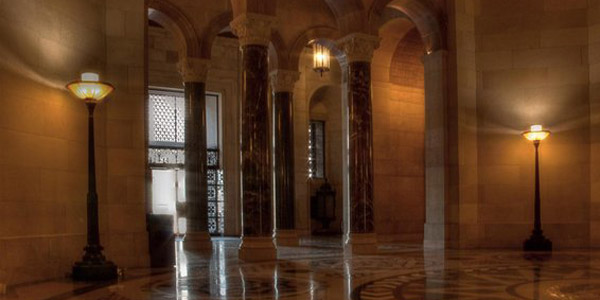 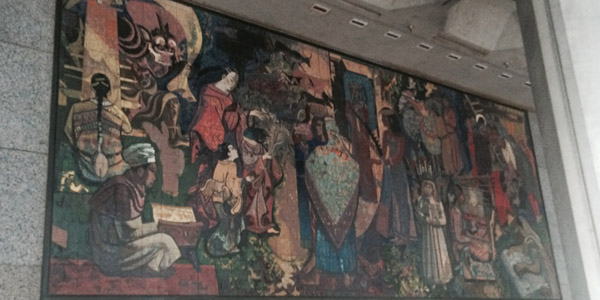 Architect Austin Whittlesey designed the interior of City Hall. Byzantine in style, it has huge vaulted ceilings, marble floors and perhaps its biggest feature, a giant rotunda high above the marble floor with ornate artworks and lighting fixtures. Whittlesey said he was influenced by Paris, Florence and Alexandria and wanted to also acknowledge the new industries of the period including aviation, filmmaking and automobiles in his designs.
Today, many visitors come to view the observation deck on the 27th floor. The deck allows incredible 360-degree views– west to the Pacific Ocean, east to the vast mountain ranges, south down past Long Beach and north to the Hollywood sign. Also on the 27th floor is the Hall of Mayors, celebrating the city’s long line of Mayors, and in the centre of the space a statue of the city’s longest serving Mayor, Tom Bradley, who served from 1973 to 1993.
After 60 years standing, the City Hall’s first major renovation took place in 1989. As part of the project the exterior façade was restored with terracotta and granite. A second major renovation, a $299 million facelift was undertaken from 1998-2001, after the 1994 Northridge earthquake. Amongst the renovation was a unique find; the Charles Lindbergh Beacon, an aircraft guidance light that was placed atop City Hall in 1928 to help pilots identify both the building and the city as a destination. It soon became problematic for pilots and the white light turned to red before being taken down after World War II. As part of the 2001 reopening of the City Hall, the beacon was restored and now sits as the jewel in the building’s crown once again. It lights the night sky for special civic occasions. 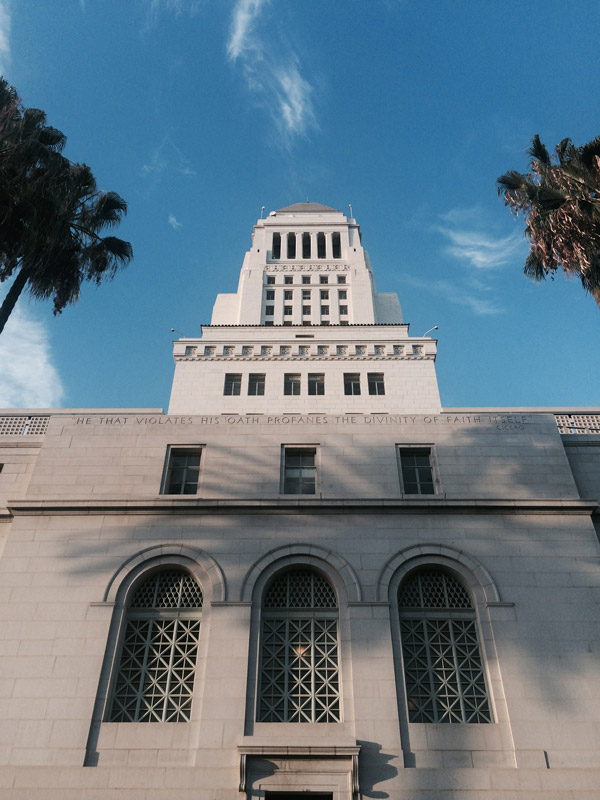 The team at Project Restore seismically stabilized the entire building to protect it from any future earthquakes, and the building is now supported by 526 base isolators that allow the building to sustain up to an 8.1 quake, by allowing the building to move independently of the ground in the event of the quake. Today the Mayor has an office in room 300, and the LA City Council meets in its chambers every Tuesday, Wednesday and Friday at 10:00am.
The Los Angeles City Hall is located at 200 North Spring Street, on the corner Temple and Main Streets in downtown Los Angeles. The building is open 7:30am-5:00pm, Monday to Friday.