Punk rock. Subversive. Mind-blowing. These are just a handful of the words to describe “Mike Kelley", an epic retrospective showcasing 250 pieces of the artist's work at The Geffen Contemporary at MOCA. The exhibition spans almost 30 years (1974-2012) of Kelley's multi-faceted career and includes drawings, sculptures, paintings, installations, music and video footage. 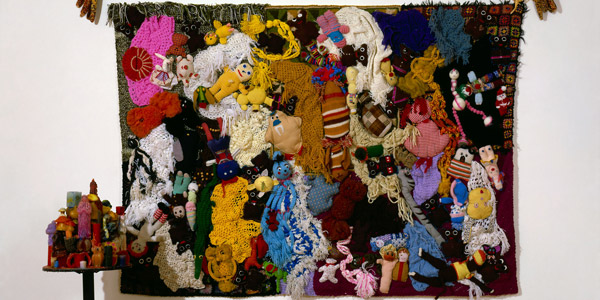 Though Kelley was a Detroit native, he has serious ties to the city of Los Angeles, having lived and worked here for the expanse of his adult life until his death at age 58. Traces of both cities can be seen in his work, which tends to question, subvert and sometimes attack cultural totems like school, home and church. While it may seem odd to recommend a retrospective of this ilk to architects and interior designers, it's Kelley's deft deconstruction of both our attachment to these spaces and the weight they hold in our memories that makes it a must-see for anyone in the industry. 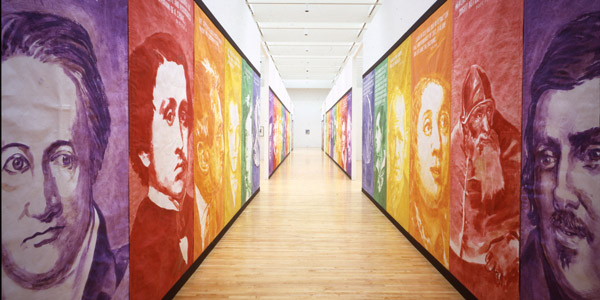 Rather than split the exhibition into several rooms, MOCA decided to embrace the warehouse space's open layout. The end result, is a funhouse-like journey through the artist's brain, underscored by a cacophony of animalistic sounds that emanate from the various videos and instillations pieces.

While his large-scale artwork (especially those crafted from unexpected materials like ketchup on canvas and wax on carpet) and stuffed animal sculptures are fascinating, those in the industry will be most interested in his instillations. “The Little Girl's Room", is a minimalist rendering of a bedroom inspired by a performance script Kelley wrote detailing a little girl's dream within a dream. In it, the girl switches out her floral room décor for something minimal and geometric after seeing, “the face of a pimp-like man whose smile reveals an infinity of sharp teeth". The faux bedroom, represents the transition from girlhood to adolescence – one that often isn't as simple or sweet as we imagine it to be. For interior designers, the piece is interesting because it assigns the contents of a room greater meaning than the room itself. The pieces aren't just there out of necessity or want, but because they symbolize a moment in the occupant's life. 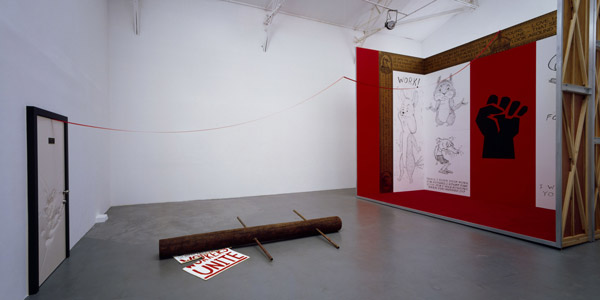 Just past “The Girl's Room" is “Kandor's 2007-11", which is series of scaled down representations of the fictional city on the planet Krypton, also know as the birthplace of Superman. In the Superman myth, after Krypton was destroyed, Kandor was shrunken and preserved in a bottle. Kelley's ten, three-dimensional incarnations of the city (both in and outside of the bottle) are rendered in bright comic book colored materials like Plexiglass. Not only is this piece a commentary on how inexact a memory can be (What does home look like? Does it look like how we remember it?) but it's an interesting way to explore how many different ways the same cityscape can be reimagined.

The most layered section of the retrospective is “Day is Done", which is part of a larger series called, “Extracurricular Activity Projective Reconstruction". Kelley created video skits and sets based on found photos from yearbooks and newspapers. These interpretations effectively deconstruct the power of memory by reassigning new meaning to someone else's moment in time. 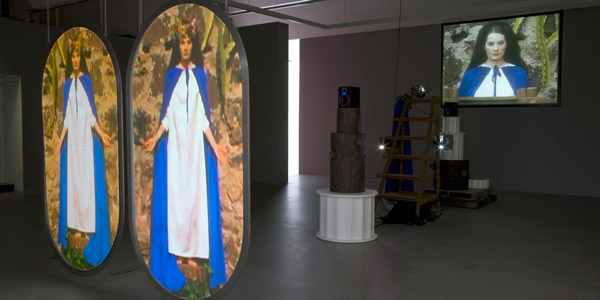 This is an interesting concept for architects and interior designers to ponder, considering so much of their work is often giving new meaning to an old space. It's also one that the entire retrospective forces us to confront – just how valid are our attachments to these markers in our history?

For more information on the Mike Kelley retrospective, visit moca.org.