The dynamic, fast-growing art scene in Los Angeles just got another major addition to its already vibrant institutional lineup — the much anticipated Marciano Art Foundation. The brainchild of Guess Inc. co-founders Paul and Maurice Marciano, the new space officially opened to the public on May 25 and is housed in a former Scottish Rite Masonic Temple on Wilshire Blvd. Originally designed by Millard Sheets in 1961, the building was re-purposed and renovated by starchitect Kulapat Yantrasast of wHY Architecture and Design.

To launch the operation, they unveiled exhibitions including Yayoi Kusama’s “With All My Love for the Tulips, I Pray Forever," and “The Marciano Collection,” which was curated by Philipp Kaiser and on view through December 24th. Kaiser drew on the Marciano brothers' more than 1,500-piece contemporary art collection, choosing to show current stars such as El Anatsui, Yael Bartana, Sterling Ruby, Allora & Calzadilla, Mark Grotjahn, Wade Guyton and many more. 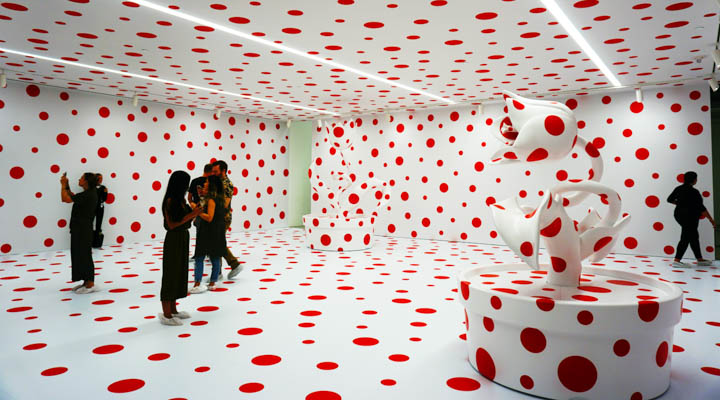 YAYOI KUSAMA,
WITH ALL MY LOVE FOR THE TULIPS, I PRAY FOREVER, 2011

Below are some of our favorite pieces and exhibitions featured over time at the Marciano Art Foundation: 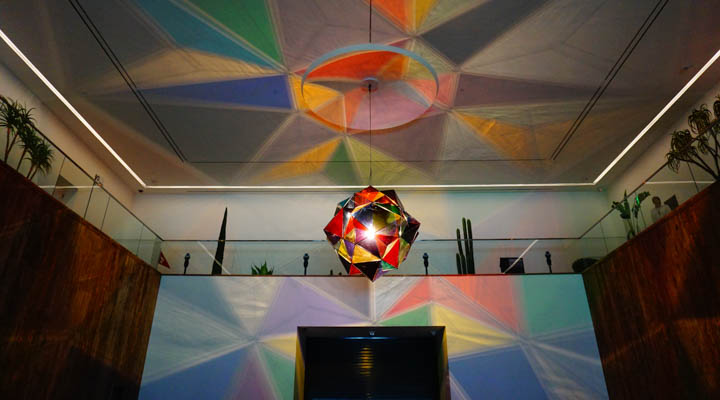 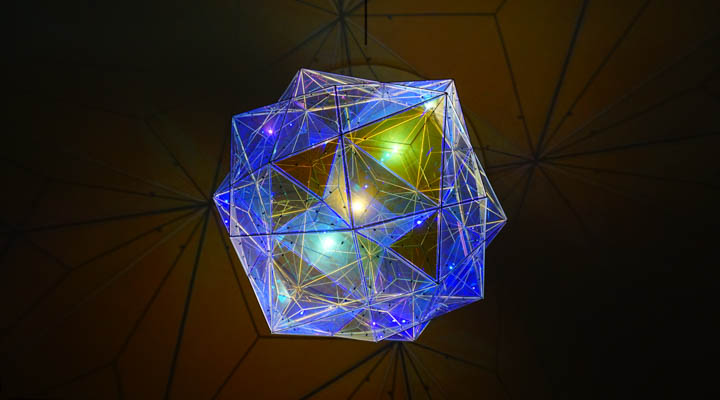 OLAFUR ELIASSON
As you enter the first room of the museum, you are met with a site-specific installation created for the foundation’s expansive first floor Theater Gallery by renowned interdisciplinary artist Olafur Eliasson. “Reality Projector” (2018) is Eliasson’s first major exhibition in Los Angeles in over a decade. The artist has conceived a seemingly simple, yet complex installation that uses projected light and the existing architecture of the space to create dynamic shadow play. 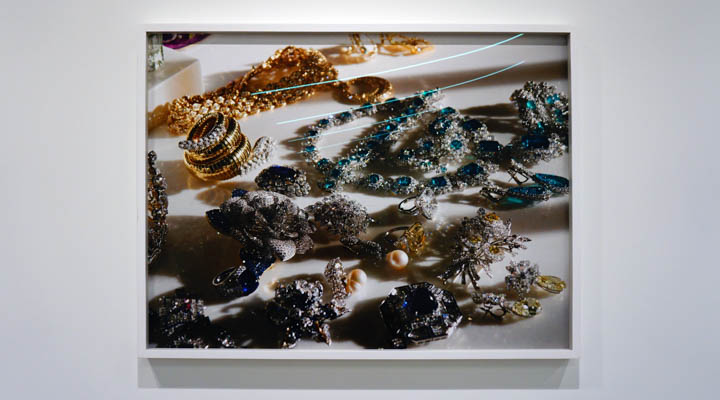 CATHERINE OPIE
Catherine Opie’s intimate photographs of late actress and superstar Elizabeth Taylor's Los Angeles home fill almost half of the fourth level of the museum. Taken over the course of six months at the Bel Air mansion where Taylor lived, the exhibition’s photographs are drawn from two series — Closets and Jewels and 700 Nimes Road. Inspired by William Eggleston’s images of Elvis Presley’s Memphis estate, Graceland, Opie has created a beautiful portrait of Taylor from her personal space and mementos. The images immortalize Taylor’s rooms, closets, shoes, clothing and jewelry, offering a mysterious and outrageous portrait of a life defined by wealth and fame. 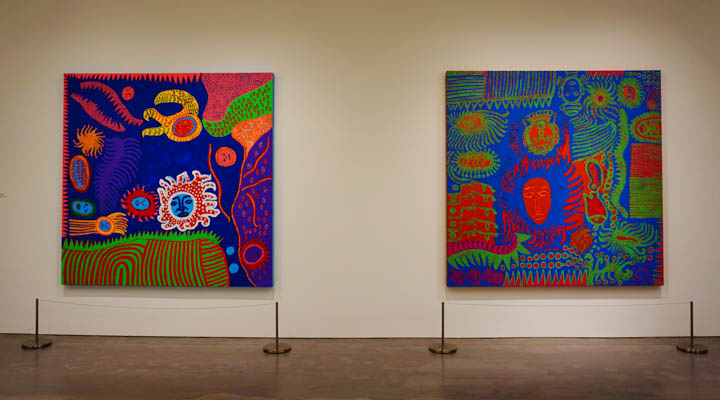 YAYOI KUSAMA
MYSTERY OF THE UNIVERSE, 2013

YAYOI KUSAMA
With a six decade long career behind her, the famed Japanese artist Yayoi Kusama shows no signs of slowing down, presenting multiple pieces at the Marciano. Although mainly known for her fully immersive sculptural rooms, she is also foraying into two-dimensional mediums, creating an expansive series of square format paintings, most spanning over six feet in height. Colorful seas of oblong shapes, motifs and figures pattern the canvasses, some of which are personified with faces and expressions. The rounded, vibrant forms suggest silhouettes of basic life forms, like cells and amoebas, tying back once again to the artist’s trademark theme of microscopic and macroscopic universes. 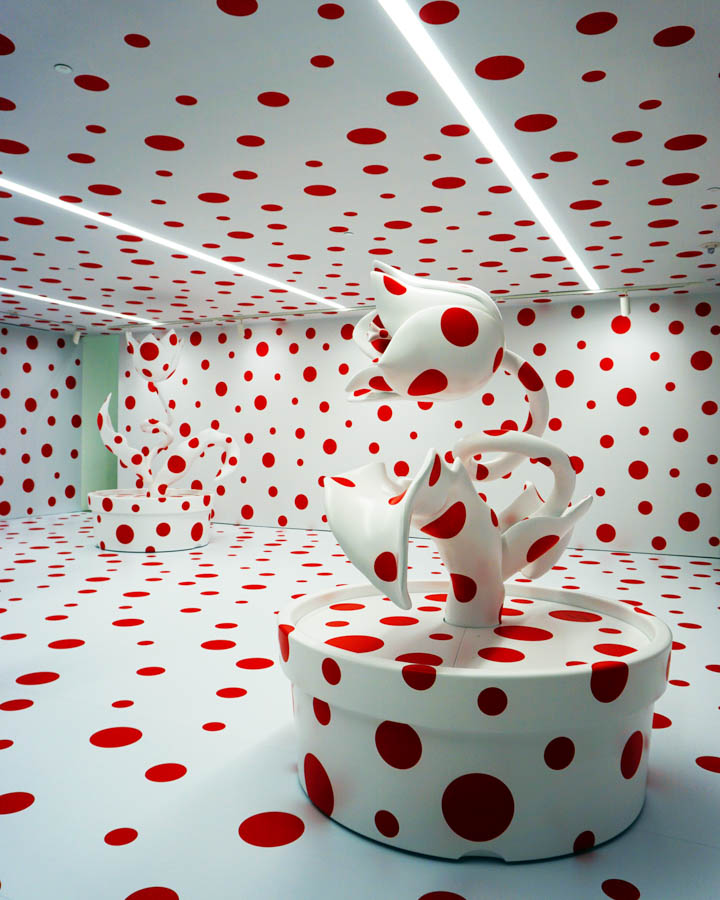 YAYOI KUSAMA,
WITH ALL MY LOVE FOR THE TULIPS, I PRAY FOREVER, 2011

YAYOI KUSAMA
Kusama’s exuberant sculptural installation "With All My Love For The Tulips, I Pray Forever" (2011) exemplifies the dualism found throughout her work between the organic and the artificial. Shown here for the first time in Los Angeles, the over-sized flower-potted tulips made from fiberglass-reinforced plastic are painted with the same red polka dots as the floor, ceiling and walls, creating an immersive viewing experience while at the same time diminishing the appearance of depth. This work exemplifies Kusama’s singular vision and her distinctive gift for drawing viewers into the work on a deeply visceral level. 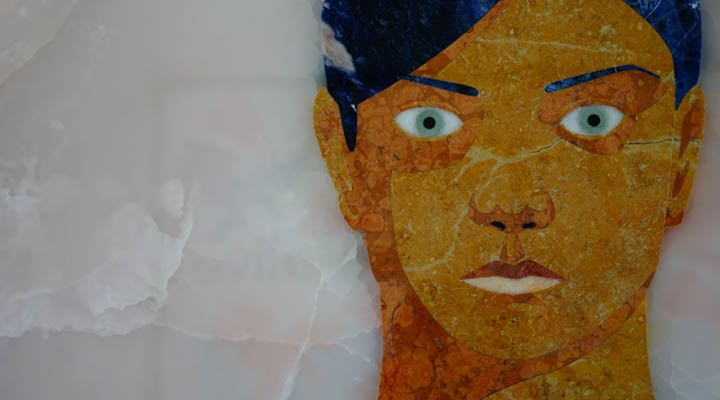 NICOLAS PARTY
In his murals, paintings, and sculptures, Nicolas Party revitalizes traditional artistic genres such as still life, portraiture and landscape. His vibrant palette feels fresh and contemporary, even while the style and subject matter are reminiscent of the flatness of medieval art. His portraits border on surreal, depicting wide-eyed strangers from an enigmatic time and place. 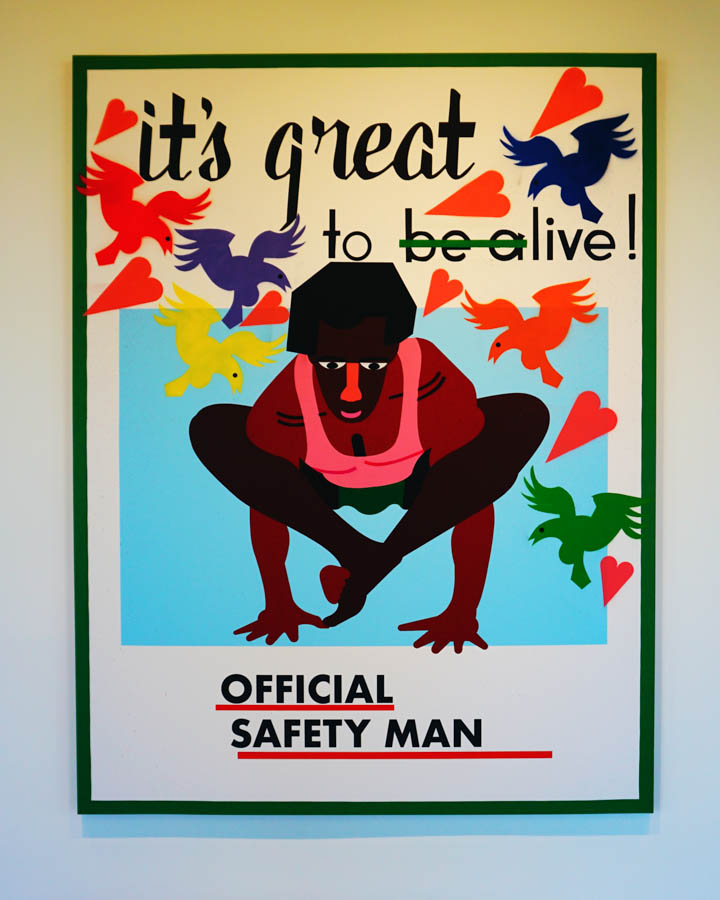 NINA CHANEL ABNEY
IN THE LAND WITHOUT FEELINGS, 2017
ACRYLIC ON CANVAS 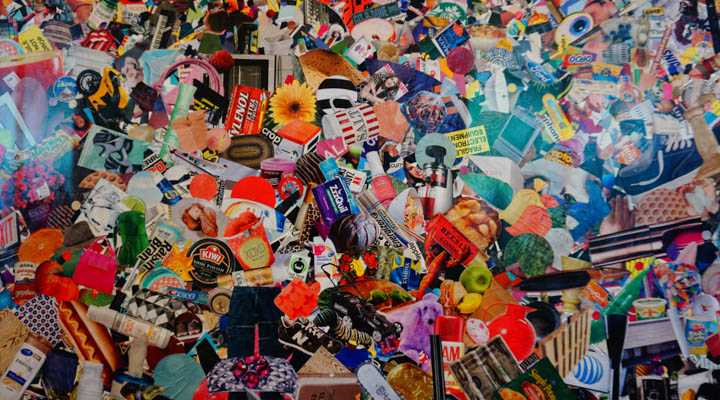 TOM FRIEDMAN
Tom Friedman is known for using ordinary objects from daily life, such as cereal boxes, paper, and magazine clippings, and crafting them into extraordinary works that transform the views perception of the mundane. In “Stuff," Friedman’s whimsical hoard of pop culture matter bursting from the frame simultaneously humors and overwhelms the viewer, reminding us of our capitalist culture and the rampant accumulation of material. 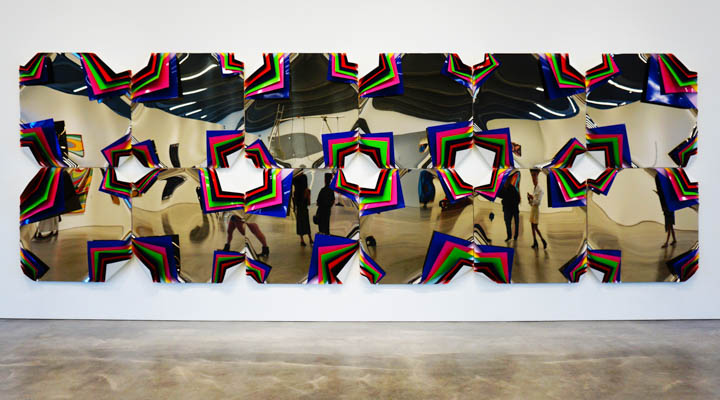