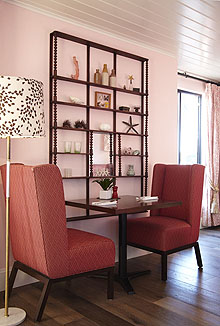 Splashes of cheerful yellow and blue poolside decor playfully leap out at you as you step into the central court of the Hotel Oceana, Santa Monica creating a feeling that's clearly Southern California. Inside the hotel's Hideaway Lounge, Dunn-Edwards' Sheer Rosebud (DE5112) is awash on the walls. The soft pink tone, trimmed in the creamy white shade of Swiss Coffee (DEW341), provides charm and an offbeat elegance that says, “you're on vacation, don't take it all so seriously." That, partnered with the framed vintage swimsuits, and black & white photos of the beachside frolickers give a nod to a history of enjoyment here that is meant to be passed on.


Interior designer Chris Barrett said the overall concept for the Hotel Oceana's design was to create something entirely different from anything else in the area, “The big adjective was FUN!" She says, “we wanted to create something unique that also appeals to luxury."


Barrett, who grew up in Santa Monica, set a goal to create a vibe to represent the area and the spirit of Southern California. But it was a childhood book that served as the inspiration to put the Hideaway Lounge in the pink. “It spun off a book called, 'The Pink Motel.' It was one of my favorite books as a child and I've always had this vision of a pink hotel. I knew I couldn't paint the Hotel Oceana itself pink but I wanted to do something. Dunn-Edwards' Sheer Rosebud (DE5112) was just perfect. We did a flat paint on the walls and a high-gloss Swiss Coffee (DEW341) on the ceiling. Along with the pieces we chose for the room, it gives the feeling of a seaside resort getaway. There's a lot of color but it's not goofy."

In a location that's merely a few steps across the street to the sandy Santa Monica beach, the Hotel Oceana rolls out a perky, inspiring setting for its clientele of entertainment and creative professionals, international visitors and even locals who occasionally move into the spacious rooms for a stay-cation or home renovation. The hotel was an apartment complex in a past life, which explains the generous rooms - most with full living rooms, a computer workstation and separate bedroom painted in a soothing shade of Dunn-Edwards Fizzle (DE5715).

This inviting décor clearly makes the Hotel Oceana a beachside dream home away from home.