Skip to Main Content
In order to be in inspired for future artistic endeavors, sometimes one must look to the past. One such place is LACMA’s small, but well-curated exhibit, Four Abstract Classicists. Though the name is taken from an exhibit mounted in 1959 at LACMA’s predecessor, the Los Angeles County Museum in Exposition Park, this isn’t a pure remounting. Instead, curator of modern art, Carol S. Eliel, put together a show that features different paintings from the same four artists in the original grouping -- Karl Benjamin, Lorser Feitelson, Frederick Hammersley, and John McLaughlin.
The Abstract Classicists were the bridge between the Abstract Expressionists and the Pop Art and Minimalist movement in the 1960s. According to critic and curator Jules Langsner, who coined their title (and curated the original exhibit), these artists intended to create pure abstractions that were autonomous and not intended to evoke shapes the viewer already has a connection to. The end result, is a collection that engages the eye, allows us to take a peek into a transitional period in the world of modern art, but doesn’t necessarily evoke great emotion. 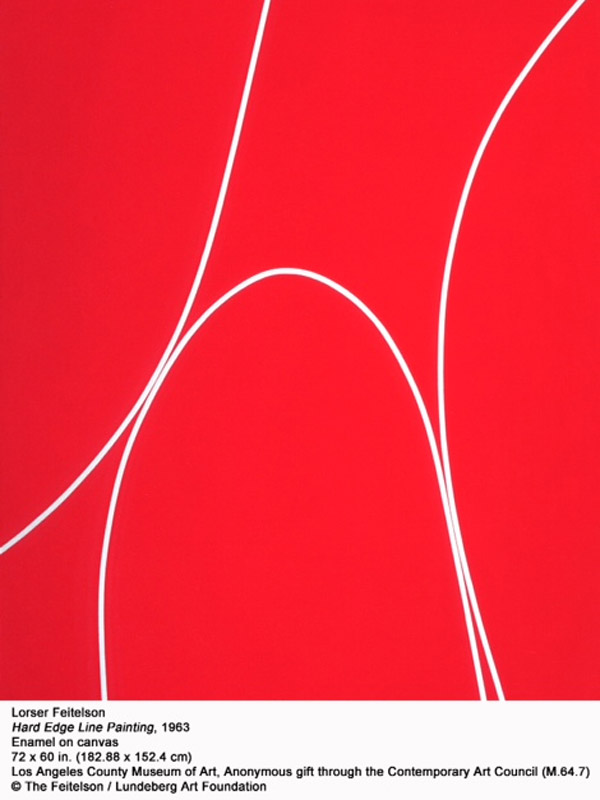 What’s most interesting about the pieces is how the simplicity and precision of many of the paintings is incongruous to the to the process by which they were created. Karl Benjamin’s Bars #7 is essentially a grid in stark shades of white, blue, black and red. Although the piece looks as if it was measured, Benjamin actually created the grid using intuition, rather than math, leaving room for error, a factor that betrays the typical process for grid-making.
The same can be said for Hammersley’s Around a Round. Rather than pre-planning the colors and shapes, the artist created the piece moment-to-moment in a free-form fashion that one wouldn’t assume from the looks of the final product – a painting composed mostly of sharp lines and edges.
Surprisingly, the one painting in the group that does elicit feeling is John McLaughlin’s #5. This stark oil on canvas, which was heavily influenced by Japanese art and culture, is simply two black rectangles set against a white backdrop. It evokes a sense of loneliness and solitude that’s striking in a grouping where the focus is on form and color.
For more information on Four Abstract Classicists, visit www.lacma.org.
Image courtesy LACMA